Home MMA News Rory MacDonald: ‘It looks like Hector Lombard is the next fight’
ShareTweet 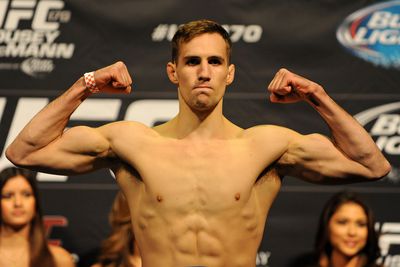 The Tristar Gym product is anxious to get back inside the Octagon after a title loss against “Ruthless” at UFC 189 this past July.

Rory MacDonald is a tough dude. He’s taken his lickings (pic) inside the Octagon and he wants to stay busy.

He’s even willing to throw down against the exiled Nick Diaz, if and when the Stockton slugger ever gets reinstated. That said, it looks like a familiar face may be next on the docket.

From his UFC Dublin Fan Q&A:

“I’m definitely not sitting out. That’s not for me. I want to be as active as possible. I’m not waiting anymore for title shots or anything like that. If it happens, then it happens. I need to fight more actively. Tyron [Woodley] would be fine… Anybody in the division or middleweight, I’ll fight. It doesn’t really bother me. I wish I could’ve faced Nick [Diaz] before his five-year suspension. It looks like his career is over… [It] looks like Hector Lombard, though, is the next fight.”