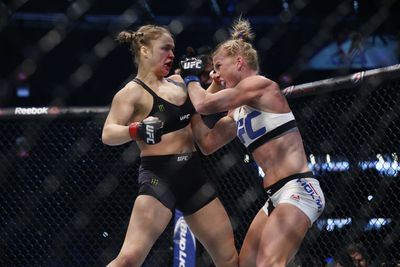 While the result of the fight opened up far more questions about her future, Ronda Rousey at UFC 193 established a mark that two years ago would have been thought of as unfathomable. Her title loss to Holly Holm not only drew more than 50,000 fans, but also topped 1 million pay-per-view buys.

No UFC event in history had broken both barriers, let alone by a woman’s fight.

Industry estimates have the Rousey vs. Holm bantamweight title change doing between 1 million and 1.1 million buys, with most estimates closer to the higher figure. It is expected to be among the four biggest UFC pay-per-view events in its history. Before Rousey, no combat sports pay-per-view event headlined by a woman had ever topped 125,000 buys.

The show drew a UFC record of 56,214 fans to Etihad Stadium in Melbourne, Australia, breaking the company’s attendance record set at UFC 129 of 55,724 set by the Georges St-Pierre vs. Jake Shields fight at Toronto’s Rogers Centre.

It should be noted that the Toronto show was an instant sellout, while the Melbourne show was set up for a significantly larger capacity, was not sold out, and had plenty of empty seats in the upper deck.

The UFC does not release pay-per-view numbers for its fights, although CEO Lorenzo Fertitta told Yahoo Sports prior to UFC 194 taking place that the pay-per-view number would be the third-biggest in UFC history, and based on how it was tracking, could end up as the second-biggest.

Holm’s win led to, by far, the most public and media attention to a fight after the fact in company history. The strong belief is that if a rematch takes place, whether it’s at UFC 200 or later in 2016, that it would be the biggest pay-per-view event ….View full article