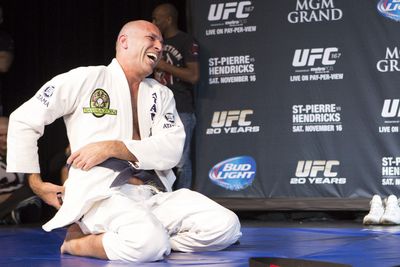 When Bellator president Scott Coker first approached Royce Gracie about returning to the cage, the MMA legend said he wasn’t sure. When Coker said it would be against longtime rival Ken Shamrock, Gracie still “played hard to get.”

But when Gracie returned home to his family after the discussion, he was beaming.

“I was like, yes!” Gracie told Ariel Helwani on Monday’s edition of The MMA Hour.

And so the trilogy bout — 20 years after their last fight — was booked about a month ago, Gracie said. Coker announced the fight as the main event of Bellator 149 on Feb. 19 in Houston on Friday. Gracie told Helwani that Shamrock being his opponent made the decision to return after almost nine years away from fighting easy.

Gracie, 48, and Shamrock, 51, famously fought in the semifinals of the UFC 1 openweight tournament on Nov. 12, 1993 with Gracie winning by submission in just 57 seconds. That bout — a lean, lanky Gracie against the hulking Shamrock — was the first rock-solid proof ….View original article