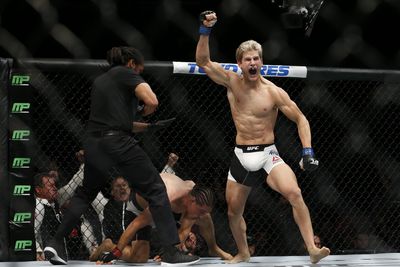 Sage Northcutt is getting a quick turnaround and he’ll be sharing the stage with fellow young, rising star Paige VanZant.

Northcutt will meet Cody Pfister at UFC Fight Night: VanZant vs. Calderwood on Dec. 10 in Las Vegas, it was announced Monday. The card will air live on UFC Fight Pass on the Thursday night before The Ultimate Fighter 22 Finale on Friday and UFC 194 on Saturday. UFC Fight Night 80 will take place at The Chelsea at the Cosmopolitan.

Northcutt (6-0) made his UFC debut with a first-round TKO of Francisco Trevino at UFC 192 earlier this month in his native Houston. The 19-year-old made headlines not only for the quick finish, but his outrageous front-flip celebration and his movie-star looks. Northcutt is being positioned as a future draw for the UFC.

Pfister (12-4-1) is coming off a win over Yosdenis Cedeno at UFC 189 in July. The Texas native has won five of his last six fights. He lost his UFC debut to James Moontasri in February. Pfister, 25, is also a prospect with a well-rounded game.