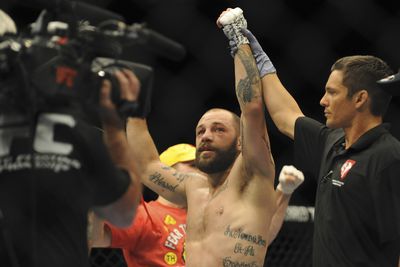 Sam Sicilia was booked to meet Doo Ho Choi twice inside the Octagon, but the Korean fighter pulled out both times due to injuries. Disappointed, Sicilia wasn’t interested in facing him anymore.

“He didn’t show up twice. That guy is made of glass. He’s always injured,” Sicilia told MMAFighting.com back in July, after Yaotzin Meza replaced Choi at UFC Fight Night 77. “And he’s a nobody. Nobody knows who he is. He has one good fight in the UFC, and got hurt twice. Working all that time and having him pull out twice, I just feel he’ll do that again. I don’t really have interest in that guy at all.”

UFC matchmakers had other plans, though, as the featherweights are once again matched up. This time, Sicilia will make the trip to South Korea to face the 12-1 prospect.

“The matchmaker for the UFC won’t drop it,” Sicilia told MMAFighting.com ahead of Saturday’s UFC Fight Night 79 clash with Choi in Seoul. “He really wants to see this match-up for some reason that is beyond me. So I have to make the trip to his home city otherwise this fight will never happen.”

After facing two different opponents when he ….View original article