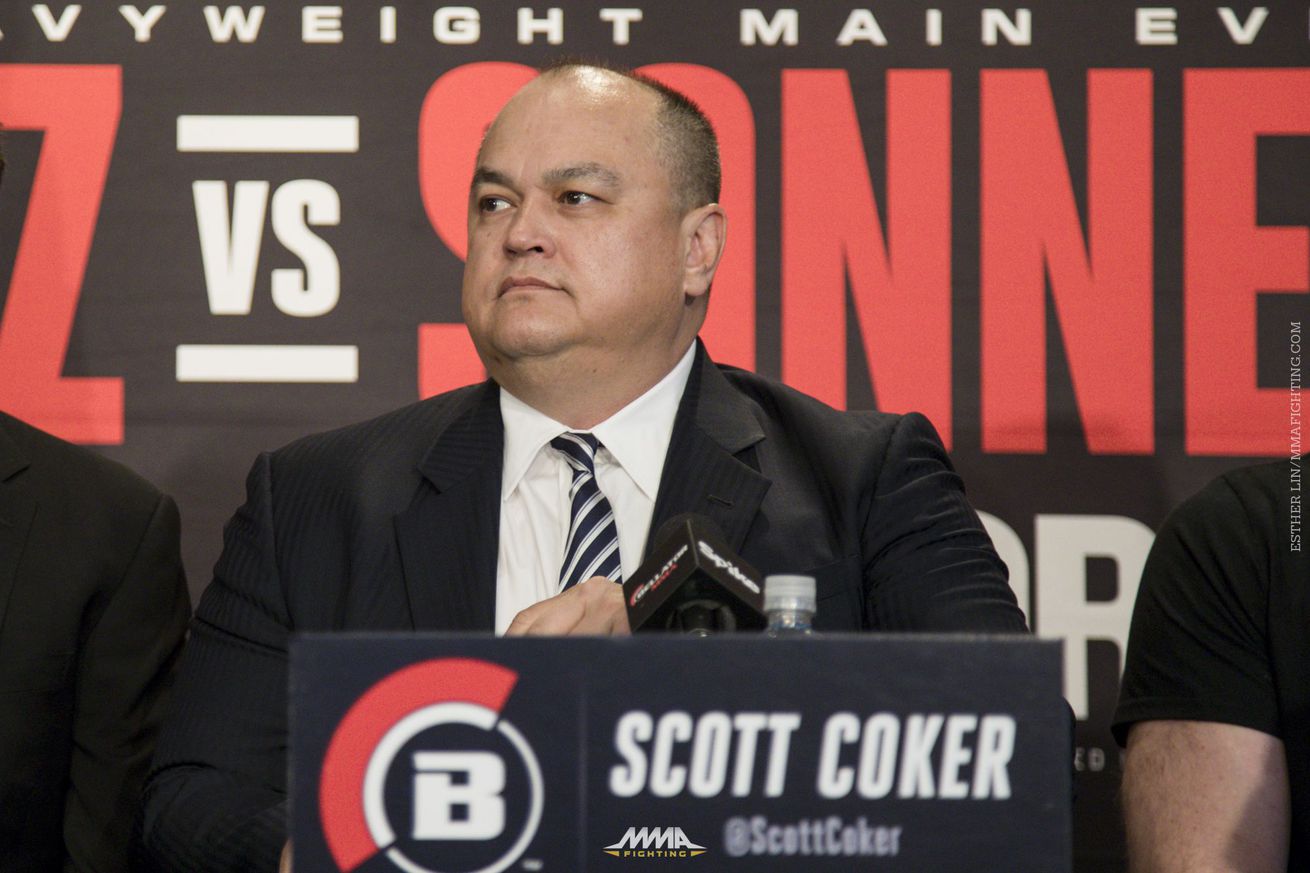 Bellator MMA is an intriguing place these days. All one has to do is look back to this time last year, when the Scott Coker-led promotion was still reeling from the aftereffects of its bizarre Gracie-Shamrock headlined show — Bellator 149 — to get a sense of how far Bellator has come in a short amount of time.

Since that mess of a night, Bellator has made repeated headlines for a bevy of roster moves and compelling free agent signings that have reformed its roster in a major way, to the point where the organization is now preparing to stage its second-ever pay-per-view on June 24 at the fabled Madison Square Garden arena in New York. And even Coker is surprised by how rapidly change has come.

“Look, for us, about two-and-a-half years into the process, we’re about two years ahead of where I thought we would be when I first came on,” Coker said Monday during an in-studio appearance on The MMA Hour. “Boy, I tell you, a lot of things happened.”

Coker was first brought onboard Bellator in mid-2014 as a replacement for original founder and CEO Bjorn Rebney. At that point, Bellator’s roster was bloated, Rebney’s insistence on staging weekly shows for up to three months at a time had produced very little in the way of creating stars, and the fallout from the promotion’s legal war with Eddie Alvarez had given Rebney’s crew a sullied reputation that was hard to shake.

With those obstacles in mind, Coker told Spike TV executives that he expected it could take them up to five years to turn the Bellator ship around.

“I told them, ‘look, you have a good roster. It’s not a great roster, but you have a good roster, and we have to build the new guys,’” Coker said. “We went and signed Aaron Pico. We and got a couple other guys. And now, the train is gone, man. We’re signing guys like crazy, all the new prospects, the Tyrell Fortunes, Ed Ruths, Dillon (Danises) of the world. But at that time, it was really about grabbing a couple guys and let’s build these guys. Let’s go back to the basics, star identification, star building, and let’s create some stars.

“And in the meantime, just like Strikeforce, let’s go buy some free agents. Let’s go buy the guys who have recognizable names. And Phil Davis was the first one who came over, then Benson Henderson, and then the floodgates opened. And now we have a very, very good roster and I’m really proud of what we’ve done, because really, I told Spike TV, I said, ‘look, this is going to be a four-to-five-year process to get to this point, because it’s not like it was back then where Pride was gone and guys were just floating around for me to start picking them up. So, we’re going to have to build some, we’re going to have to buy some,’ and that’s really been the philosophy of Strikeforce, and it’s the philosophy I brought here. And it’s worked both times, so I’m pretty proud of that.”

While many factors played a part in Bellator’s progress thus far exceeding Coker’s initial expectations, Coker attributed his success over the past few years to two unexpected changes — both of which affected the sport’s leading player, the UFC.

“One was the sale of the [UFC],” Coker said. “That changed a lot, and it changed a lot for the fighters too. I think there were some bitter athletes out there saying, ‘hey, you guys got all this money, $4 billion, and we’re still stuck in this contract.’ And I think that changed people’s minds, and it made the phones start ringing.

“The Reebok deal was the original one that made the phones start ringing, and then the sale of the company, that was the next. I noticed a difference, because fighters are creatures of comfort or habit. They like to do the same routine. When they go to camp, they’re with the same guys, same family. And when the family changes, then it’s like, ‘well maybe I should go talk to my old boss, or go talk to Bellator.’ But at the end of the day, you know what it comes down to?

“I told this to (Ryan) Bader. Look, whether you stay with the UFC or you come to Bellator, it’s good for the industry, because you’re going to ultimately get paid more. You’re going to help elevate your financial situation for you and your family because you have two bidders now. If you only had one bidder, maybe you wouldn’t be getting as much as you are now. So, to me, it’s good for the industry to have somebody else out there that can pay these athletes what they deserve, and I think they’re appreciative of it. I think they see how many (UFC fighters) have come over, so it’s just making people say, ‘oh, well I should go check it out.’”

Coker’s comments echoed recent statements made by top-10 welterweight Lorenz Larkin, who expressed disappointment about some fans decrying his recent move from the UFC to Bellator. Larkin said that having one organization — in this case, the UFC — reign as a lone superpower puts fighters in a difficult position without the leverage to negotiate better terms for their services.

Other fighters certainly seem to be listening, too. The rise in free agency has directly coincided with Bellator inking several big deals with top fighters like Larkin, Rory MacDonald, Michael McDonald, Ryan Bader and others over the past year. Coker said that talent surge is precisely the reason why Bellator looked to re-enter the pay-per-view space for its June 24 offering.

“If you look at the history of Bellator, it was a pay-per-view product before I got here, with ‘King Mo’ and ‘Rampage,’” Coker said. “Then there were some changes and I came in, and we said, ‘guys, we’re really not ready for this type of business right now, but if you want to put the building blocks together and invest in the roster, I think you guys could get there.’ So now we feel like we’re ready to go.

“To me, it’s like this: we’re not going to do like other companies where we have to do one every month, or every other month. We’re going to do pay-per-view when the fights are big enough, (when) we feel like we have an event that’s big enough to do pay-per-view. So, whether that’s twice a year or three times a year or once a year, we’ll do it more like the boxing model. There’s no set (number). We’ll be like the boxing model, so when the fights are being built up to the point where we should be doing it, then we’ll do it.

“But we’re not going to be forced into it,” Coker added. “Because otherwise everything becomes irrelevant, honestly. It’s like you’re doing it just to do it, and is it really a pay-per-view worthy card? I don’t want to be in that situation. I want to be in a situation where it’s just like boxing; when the fights build up big enough, then we’ll go for it.”

Coker said Bellator is hoping for a promising showing from its June 24 pay-per-view, which will be priced at $49.95 for a high-definition broadcast and headlined by a grudge match between recent signings Chael Sonnen and Wanderlei Silva. Coker estimated that a buyrate in the range of 200,000 would be a “respectable” number and was a goal that felt “obtainable.”

And although he couldn’t say for sure which big-time free agent Bellator would target next, Coker indicated that the battle for high-level talent in MMA is only truly beginning to heat up.

“I’m not sure, but here’s the thing: we are not going to touch a fighter until they’re free,” Coker said. “That’s silly. We’re just going to sit back and wait, because I’ll tell you, we’re in this for the long haul. This is not something that happens in a year or two or three. No, this is going to be a company that’s going to be here for years and years and years to come.

“I think that it’s been a great year for Bellator. The ratings, the sponsorships, the international fights that we’re doing, everything has been going fantastic. And I look forward to the rest of ‘17, and then to ’18 and beyond, because we’re doing some fun stuff. It’s been a fun year.”