Home MMA News She Made It! Cyborg Will Officially Fight in the UFC
ShareTweet 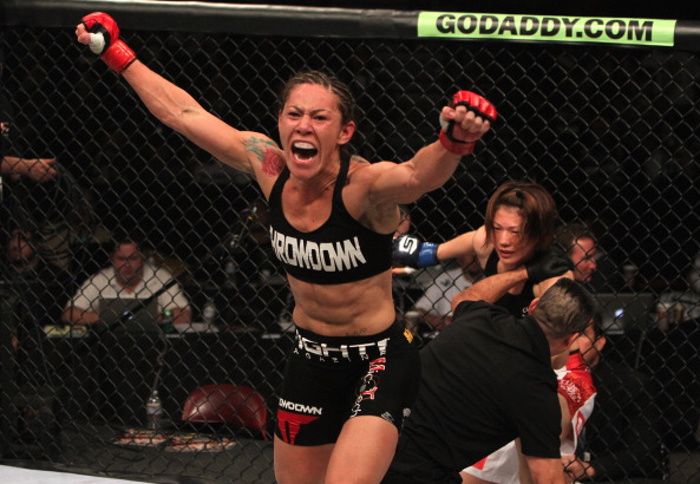 Earlier this month, we reported that the UFC was “actively exploring” letting Cris ‘Cyborg’ Justino into the UFC. For years, the best female fighter in the world has been left out of the big league, fighting for Stikeforce, Invicta, and picking up Muay Thai fights when she could. There was a ton of talk about the possibility that Cyborg could one day face the great Ronda Rousey, but regardless of how badly MMA fans wanted it, nothing ever materialized.

Well, today the UFC officially announced that the real queen of WMMA will step into the UFC’s Octagon for the first time at UFC 198 on May 14th against Leslie Smith.

Smith is coming off her recent win against Japanese star Rin Nakai, her second W in the UFC. She’s lost to Jessica Eye and Sarah Kaufman. Cyborg has been beating everyone put in front of her since 2005.

The main obstacle that prevented Cyborg from competing in the UFC in the past has always been weight. The UFC only has a 115 and 135lb division for women, and Cyborg has mostly fought at 145. But, in light of Conor McGregor moving up in weight, and a growing trend of catch-weight “super fights,” there’s no longer any real excuse to exclude her. The bout against Smith will be at a catch-weight 140lb.

The second reason that contributed to the UFC’s decision has to do with the location of the bout, which happens to be where Cyborg was born.

“This May the UFC will be promoting an event in my hometown of Curitiba, Brazil, a city very rich in fight history,” Cyborg recently wrote on her website. “It would be an honor to return back to the city I was born in, and to step inside of the Octagon with an opportunity to ….View full article