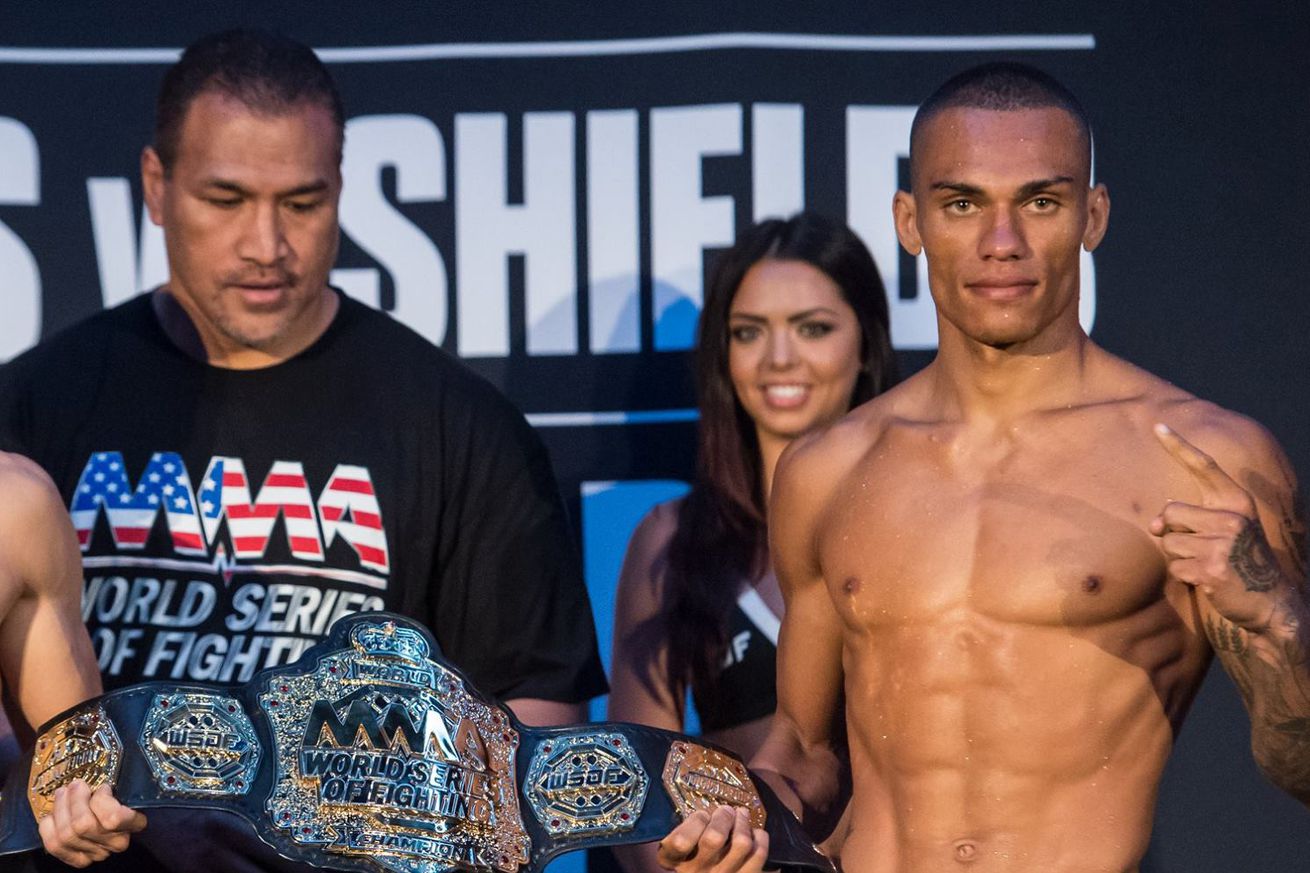 Sheymon Moraes hasn’t fought since June 2016, but that’s not his fault.

Coming off wins over Luis Palomino and Robbie Peralta, the Brazilian featherweight completed his four-fight deal with World Series of Fighting, and wants to sign with another promotion and move on with his career, but says that WSOF won’t let him go.

“My contract ended in November, but there’s this negotiation period until July,” Moraes told MMA Fighting. “They wanted me to re-sign and fight at the event in New York and I said OK. I needed to fight. We agreed to money I liked and I waited for the contract to sign.

“They sent me the contact three weeks later saying that it wouldn’t be possible to fight at the New York card, and the money was not what we had agreed to. I wasn’t interested, I asked to be released, and they won’t let me go. I’m stuck there, I can’t fight anywhere and do anything. My child will be born in April, and I have to work, to bring money home.”

Moraes asked to be released, but says WSOF president Ray Sefo gave him a disrespectful response.

“He asked if in addition to letting me go, if I wanted him to bend over,” Moraes said. “I didn’t like this answer. He was disrespectful to me. That made me upset. That’s one of the reasons why I don’t want to re-sign with this organization.

“They said they won’t release me, and I want to understand why,” he continued. “They let every champion go except the featherweight champion (Lance Palmer). They let Marlon (Moraes) go, Justin (Gaethje), the two-division champion (David Branch), and I can’t understand why I’m more important than those champions.

“The last guy I fought, Luis Palomino, was also let go, so I can’t understand that. I only fought four times in more than 30 months, and when they offered to re-sign me they said they could only promise me one fight a year. Why would I sign a contract to fight once a year? I’m young, I have to fight.”

MMA Fighting reached out to Ray Sefo for a comment on the situation, however, he did not respond.

Moraes signed with WSOF after scoring six straight victories in the Brazilian circuit between 2012 and 2014, and earned a shot at the WSOF bantamweight championship after one win in the promotion. Moraes lost to then 135-pound champ Marlon Moraes in August 2015, and decided to move up to the featherweight division.

“When I signed the contract, (Antonio Rodrigo Nogueira) ‘Minotauro’ was my manager, and they promised us a lot of things,” Moraes said. “They guaranteed I’d fight every five months, that they would let me go if the UFC wanted to sign me. I didn’t speak English back then, ‘Minotauro’ gave me all the information, and I said OK and signed.

“When I moved to the United States, I saw that it was way different than what they told me. I asked talked to them, and they said they couldn’t do anything because I already signed it. It was a big mistake.”

Eight months after his last fight, and about to become a father, Moraes looked for other jobs as a way to bring money home. After delivering food, the Brazilian fighter started to drive for Lyft a couple of weeks ago. That’s how he’s paying his bills now, but that is not helping his MMA career.

“I train in the morning and drive the rest of the day,” he said. “On Fridays, Saturdays and Sundays, I drive all day.

“I train since I was four years old. That’s the only thing I know. I mean, I know how to do other things, but what I love doing is fighting and that’s a big problem. Driving all day hurts my arms and my back.

“I can fight any featherweight in the world. I just need to fight. I want to work and move on with my career, but I’m stuck here.”