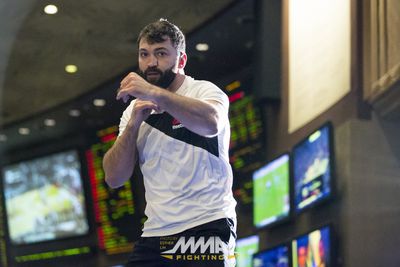 “The Pit Bull” is ready to rock as he gets set to put his four-fight win streak on the line against Stipe Miocic in the UFC 195 co-main event tomorrow night (Sat., Jan. 2, 2016).

Way back in 2005, Andrei Arlovski defeated Tim Sylvia to capture the UFC heavyweight championship and he defended it later that year against Paul Buentello.

A decade later, “The Pit Bull” finds himself a relevant figure in the 265-pound division as he goes for his fifth consecutive UFC win by clashing heads with No. 3-ranked Stipe Miocic at the UFC 195 pay-per-view (PPV) event tomorrow night (Sat., Jan. 2, 2016) in Las Vegas.

Arlovski, who will turn 37 in February, recently knocked out two foes in ZUFFA (Travis Browne, Antonio Silva) and is on the cusp of attaining his second crack at gold in the organization he first began competing in 15 years ago.

The Belarusian bruiser opens up during his recent media scrum:

“I still have a fire under my ass and I’m ready to go. I definitely want to be a champion again, but one step at a time. I have to beat Stipe and then we’ll see what’s going to be. I became a smarter fighter.”

It’s hard to argue with Arlovski when you take a look at his track record, dating back to Aug. 2011.

After his dismissal from UFC, and subsequent tumultuous tenure in the now-defunct Strikeforce promotion, he’s racked up a 10-1-(1) record, with victories over ranked competitors like former division kingpin Frank Mir, Browne and Silva in the last four years.

His next foe, Miocic, sports a 6-2 UFC record and holds wins over Mark Hunt, Gabriel Gonzaga, and Roy Nelson.

Check out his 23-minute mauling of the “Super Samoan” here.

The Croatian-American is one of the more complete heavyweights on the ….View full article