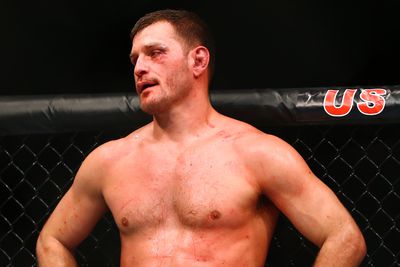 The UFC has lost the co-main event in its return to Dublin.

Stipe Miocic, who was scheduled to take on veteran Ben Rothwell in the co-headliner of UFC Fight Night 76 at Ireland’s 3Arena on Oct. 24, was forced out of the bout due to an undisclosed injured, sources told MMAFighting.com’s Ariel Helwani following a report by MMA Junkie.

According to UFC’s Dave Sholler, the promotion “is reviewing options for a potential replacement.”

Gutted Sorry to the fans. Sorry to the @ufc sorry to @RothwellFighter I’ll be back soon. But first I’d like to be able to put my socks on

Miocic (13-2) campaigned for a shot at heavyweight champion Fabricio Werdum after scoring a brutal fifth-round finish over Mark Hunt in May, improving to 7-2 under the UFC banner, but was booked against Rothwell instead.

Rothwell (35-9) finds himself without an opponent 11 days before his return to the Octagon. Ranked at No. 7 in the UFC heavyweight division, Rothwell is coming off impressive wins over Matt Mitrione, Alistair Overeem and Brandon Vera.