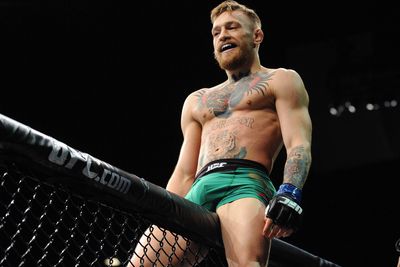 Why are so many Ultimate Fighting Championship (UFC) termites suddenly coming out of the woodwork?

Probably so they can feast on the success of reigning 145-pound kingpin Conor McGregor, who is now the top dog in his division. And if we are to believe promotion president Dana White, any pay-per-view (PPV) fight card headlined by the “Notorious” Irishman is going to return beaucoup bucks at the box office.

Who didn’t earn it, are the shine stealers who now want to call out McGregor, according to former lightweight champion Anthony Pettis, who told Jon Anik and Kenny Florian (via MMA Fighting) that fighters need to make their own names and stop trying to swipe someone else’s.

“It’s great to see the guy talk the talk and then beat Aldo like that. We’ve had some great guys go down there and try to beat Jose Aldo and it didn’t work. [McGregor] comes along talking the talk and then he walks the walk. You’ve got to respect that. It’s great for the lighter weight classes. He’s bringing in the numbers like he says. People want to watch him fight. I feel it’s annoying to see everybody try to call him out now. The guy made his name on his own and all these guys are trying to take his shine. I guess that’s the sport. Somebody comes in and creates their name, their buzz gets big and somebody else tries to steal it.”

So, about that “shine” thing…

To be fair, it was McGregor who told the lightweights — as well as champion Rafael dos Anjos — that he was on his way up to 155 pounds after disposing of Jose Aldo (all at the same time), so he picked ….View full article