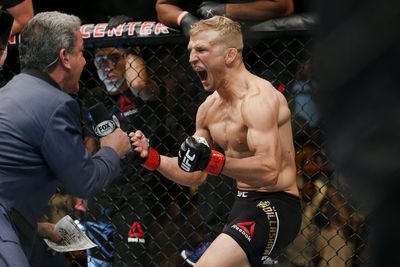 In late November, T.J. Dillashaw and Dominick Cruz kicked off UFC Fight Night 81’s promotional tour with a joint appearance on Boston sports radio. It proved to be a memorable sight. With Dillashaw seated just a few feet away, Cruz launched salvo after verbal salvo in the direction of the reigning bantamweight champion, making for the type of pre-fight sizzle the UFC marketing machine often only dreams about.

Cruz’s message was clear: if Dillashaw was hoping for another quiet lead-up to a bantamweight title defense, he picked the wrong dance partner. And whether Dillashaw liked it or not, it was going to be a long ride to Jan. 17.

“That’s just not who I am, I’m not going to be the talker,” Dillashaw told MMA Fighting. “I’m not going to go out there and turn this into the WWE like a lot of guys are wanting to do, like building drama behind the fights. It’s the Conor McGregor era now, it seems like. Everyone is wanting to make a name for themselves, and Dominick Cruz has been doing that by talking. He’s been behind a desk, being a reporter, talking about fights. I’ve been relevant fighting, so that’s what I want to do. That’s what I’m comfortable doing.”

Dillashaw may not have much of a choice this time around.

Injuries kept Cruz glued to the shelf for a majority of the past four years, but the layoff gave Cruz plenty of time to hone his skills as an analyst for FOX Sports. Now the once soft-spoken ex-champ is a veritable microphone fiend, widely considered to be one of the most articulate minds in the game today, and Dillashaw can’t help but wonder if his opponent is simply following the blueprint to promotion laid out by McGregor.