Home MMA News T.J. Dillashaw: ‘I wanted to be Team UFC, but the more Team UFC you are, the worse you get treated’
ShareTweet 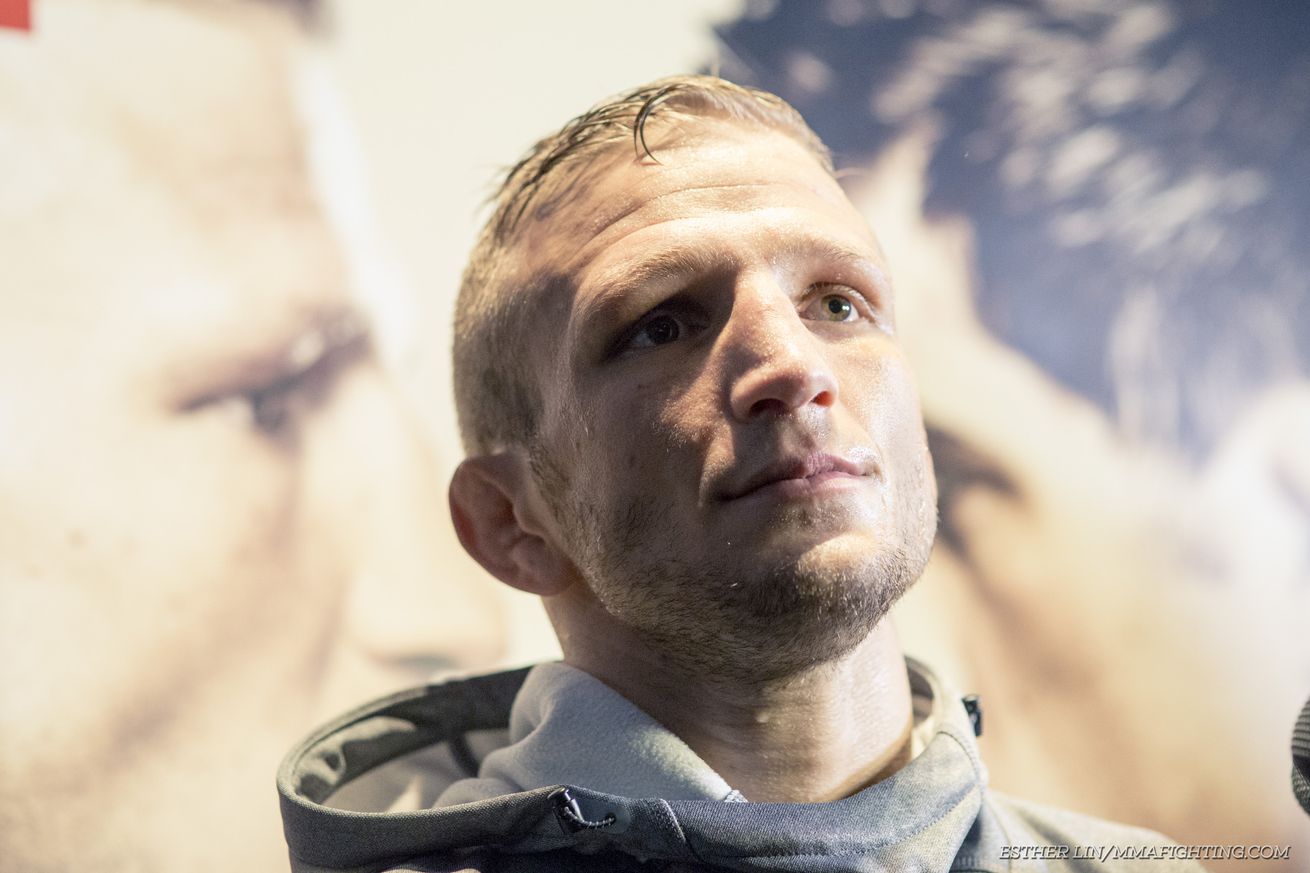 It wasn’t long ago that T.J. Dillashaw was one of the UFC’s most surprising success stories. Back in 2014, the underdog TUF alum parlayed an unexpected title shot into a stunning, near two-year title reign over the UFC bantamweight division. Dillashaw ultimately dropped the title to Dominick Cruz this past January, but these days, the 30-year-old former UFC champion is still making history in a different kind of way.

Last month, Dillashaw joined fellow UFC veterans Georges St-Pierre, Donald Cerrone, Cain Velasquez, and Tim Kennedy, as well as ex-Bellator CEO Bjorn Rebney, in the announcement of the Mixed Martial Arts Athletes Association (MMAAA), the latest effort to bring fighters together under one common cause and even the playing field between the UFC and its athletes.

Dillashaw is just one of several UFC fighters who make up the executive board of the MMAAA, giving the organization the most high-profile fighter backing of any UFC unionizing push before it. And though Dillashaw made the decision to participate out of the necessity for change, he admits that it was still a terrifying experience to finally take the group public.

“Even all the way down to the day before, it’s kinda like, ‘oh man, should I go down and do this? Should I be the one who steps up? Should I be that face?’ But ultimately, someone is going to do it, and we have a good group of guys to do it,” Dillashaw explained on a recent edition of The MMA Hour. ”It’s just got to happen, and I feel like I’m happy to be in that place, to be someone who’s going to be looked at in history for hopefully standing up and making a change.

“I’ve gotten a great reception from a lot of other fighters now when I went to the TUF Finale (in Las Vegas), when I was there for the whole week. Seeing guys warming up, they were super curious about it. They would ask me about it. They want more information about it and they’re onboard the more I talk to them. And some big-name fighters too. Guys who have obviously wanted this as well but were in everyone else’s situation, just too scared to step up and do it.”

The MMAAA’s mission statement is to bring UFC fighters together under an association and collectively bargain for a variety of changes within the UFC ranks, ranging from increased wages and improved health insurance to a more robust post-retirement support system. Dillashaw said the cause is one that he has supported for “a long time,” but that it wasn’t until the MMAAA approached him that he felt comfortable enough to publicly attach his name to such a risky pursuit.

Dillashaw also admitted that his own recent interactions with the UFC were the proverbial straw that broke the camel’s back and finally convinced him to speak out about the lack of agency fighters hold over their destinies.

Dillashaw is currently slated to fight top contender John Lineker in a bantamweight title eliminator on Dec. 30 at UFC 207, however that booking came after months campaigning unsuccessfully for a title rematch against Cruz — a title shot that eventually went to lower-ranked contender Cody Garbrandt. Dillashaw described the experience and the negotiations that went along with it as frustrating enough to tip him over the edge once the MMAAA came calling.

“I would lie if I said it wasn’t,” Dillashaw said. “Look man, I even reached out to Dana (White) and I told him, look, I’ll do whatever I need to do. … I was like, ‘look, I know that WME and CAA are enemies. If it’s going to help you for me to leave them (CAA), look, I’ll be Team T.J. Dillashaw, I’ll be Team UFC, whatever you want me to do.’”

Dillashaw said he met with UFC president Dana White prior to the announcement of Cruz-Garbrandt in an effort to push for what he wanted and renegotiate a contract that only paid him $25,000/$25,000 of a show/win purse for his UFC 200 victory over top contender Raphael Assuncao. But rather than having his voice heard, Dillashaw explained that he ended up feeling like he got tricked into signing a new eight-fight deal as a “consolation prize” after White told him that he would “push” for Dillashaw to get the title fight.

According to Dillashaw, the meeting between he and White ended with Dillashaw being told to give the UFC president a call back in the ensuing days, but things only went south from there.

“He just wouldn’t call me back,” Dillashaw said of White. “He wouldn’t get ahold of me. He wouldn’t tell me if I was getting the title shot. He wouldn’t say anything. And then eventually I find out from social media that Garbrandt was getting it. … From the way I heard about it, Cruz and Garbrandt had already even signed to fight each other, so I kind of felt a little disrespected and lied to my face about it. It would’ve gone over easier if he would’ve just told me from the beginning that I wasn’t getting the fight, instead of making me look like a jerk by trying to create a bunch of drama to get this fight. I was willing to do whatever it took to get it, and just to kinda be pushed aside like that and to find out on social media, I feel like it was really disrespectful.

“I’d like a phone call. I mean, I’m a previous UFC champion of yours. I’ve taken fights on one-day notice. I fought Joe Soto on less than 24 hours’ notice (at UFC 177) for you guys to save the show. They called me begging me to take that fight. Where I could be a Jon Jones, I could be whoever and turn the fight down like many champions have, I step up on a day’s notice for you guys and don’t receive one dollar of bonus for that fight. They told me, ‘look, we have to cancel this show if you don’t take the fight. This could put the UFC under. We’ve had a lot of cancellations. Jon Jones canceled a fight on us. We need you to take it.’

“They gave me the whole hype-up spiel of ‘take this fight,’ and look man, I love the UFC. They’re the best organization in the world. They have the best fighters in the world. So I wanted to stand up and be a team player. I wanted to be Team UFC. But the more Team UFC you are, the worse you get treated, it seems like. Everyone that’s going to act like a professional and do their job gets pushed aside and gets taken advantage of.”

Dillashaw spent his days after the MMAAA announcement in Las Vegas to corner his teammate Joseph Benavidez at The Ultimate Fighter 24 Finale. He said that several members of the UFC staff were cordial with him, but that he had not spoken to any UFC executives since the big reveal.

But the same can not be said of his fellow fighters. Dillashaw echoed past statements made by the rest of the MMAAA executive board in revealing that several UFC athletes have already expressed interest in joining the group over the past week, including a few big names that might surprise observers.

“They’re all, obviously, verbal agreements,” Dillashaw said. “And that’s kinda how this whole thing going down. But week-by-week, they’re going to continue to announce some big names. They’re going to announce some big names in an announcement here soon, kinda to keep the ball rolling so people don’t forget about it. Say it was 50 of us who came out and talked about it. Sure, that makes a big statement that all 50 of us came out at once, but it’s going to make a bigger statement, I think, to do it week-by-week. To be in the public eye every week, with fighters saying, ‘look, I don’t think this is right. Look, I don’t think this is right.’

“I’ve seen past fighters who don’t seem all there anymore, can hardly walk around or look like the Tin Man, they’ve just been through the wringer. And so I think it’s just time to start thinking about your future. Everyone wants to think about the now and being the best in the world, and pushing through these injuries that we always go through in camp. But not only do we need to get paid more to help provide for our families and for putting our life on the line, but also it’d be nice to have health insurance. I mean, right now I have to pay for health insurance for myself, which is very expensive. As a professional fighter, you go to an insurance company and they ask you your occupation. You’re a professional fighter, it’s very expensive to get insured, as well as my wife and just everything at home. I have to worry about my own retirement plan. I have to put away for my own 401k and all the getting 1099s because we’re independent contractors. Just everything.

“There’s a lot of things that would help out for us athletes that need to change. We’re controlled more than any other professional sport. We’re told what to wear, when to wear it, what we’re allowed to say in our interviews. I have to wear Reebok. We have to tell the UFC or USADA where we’re at 365 days a year. But we don’t have health insurance. We’re treated worse than an employee. It’s just crazy, man.”