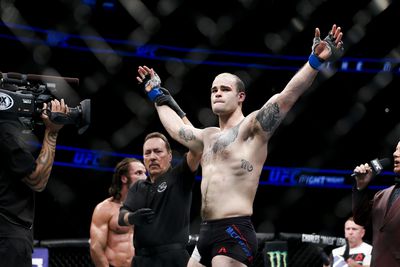 In a time when MMA’s “free market” is as publicly discussed and seemingly alluring as ever, there goes Tamdan McCrory, trotting up to the UFC’s front desk and eagerly filling out a job application.

The 29-year-old New Yorker fought for the UFC from June 2007 to August 2009, posting a 3-3 record during that stretch, only to endure a series of hardships that bucked him from the sport of MMA altogether.

“I’ve had to overcome loss – personal, professional and financial issues I’ve struggled with,” McCrory told MMA Fighting. “Luckily this year I was able to turn a corner on a lot of those to get to here and start 2016 on a high note.”

After a five-year hiatus, McCrory resurfaced, this time competing for rival organization Bellator MMA. After knocking out the heavy-handed Brennan Ward in 21 seconds and submitting ground specialist Jason Butcher in 66 ticks, McCrory made his next move. He was primed for a payday, and there was only one business name he wanted to adorn the check.

“If there was better money elsewhere, they weren’t offering it to me,” McCrory said. “Bellator had no interest in marketing my story or investing in me. So if that’s the case, I’m going to go somewhere where people are going to pay me equitably and give me more exposure.

“I have the opportunity to win bigger bonuses than I would ever get with Bellator [in the UFC]. It was an easy call, because I’ll roll the dice to make 50 g’s every time as opposed to getting the underdog money in Bellator.”

The free market wasn’t so difficult to navigate for “The Barncat.” With outside offers coming up short of his desired payout, he went back to the eight-sided cage to face The Ultimate Fighter standout Josh Samman ….View full article