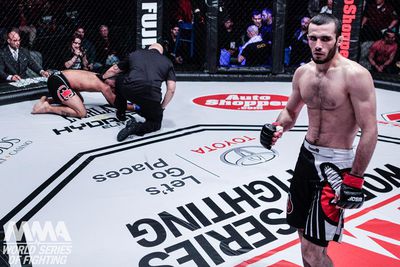 MESA, Ariz. — The first thing Islam Mamedov noticed about California was the weather. Then the women. It was early March, and even after years of warnings from lifelong friend Khabib Nurmagomedov, the culture shock was the most positive kind of bizarre for Mamedov, a 25-year-old lightweight who after a marathon flight found the frigid mountains of Dagestan replaced by the picturesque beaches and Sunset Boulevards of his most improbable daydreams.

It was all very strange, and in many ways, it still is. If five years ago, somebody were to tell Mamedov that he would be living part-time in America, a regular at one of the country’s best MMA gyms — San Jose’s American Kickboxing Academy – training under the watch of a UFC champion, and considered one of the most promising prospects in one of the sport’s big-three promotions, well, “I would’ve laughed,” Mamedov says through his translator, smiling. “I would’ve never believed that.

“We grew up on Hollywood movies. We were always watching Hollywood movies, The Terminator or Die Hard. We were watching America all the time, and I didn’t know: is all of that true? Is that the real America they’re showing me in the movies? But ….View original article