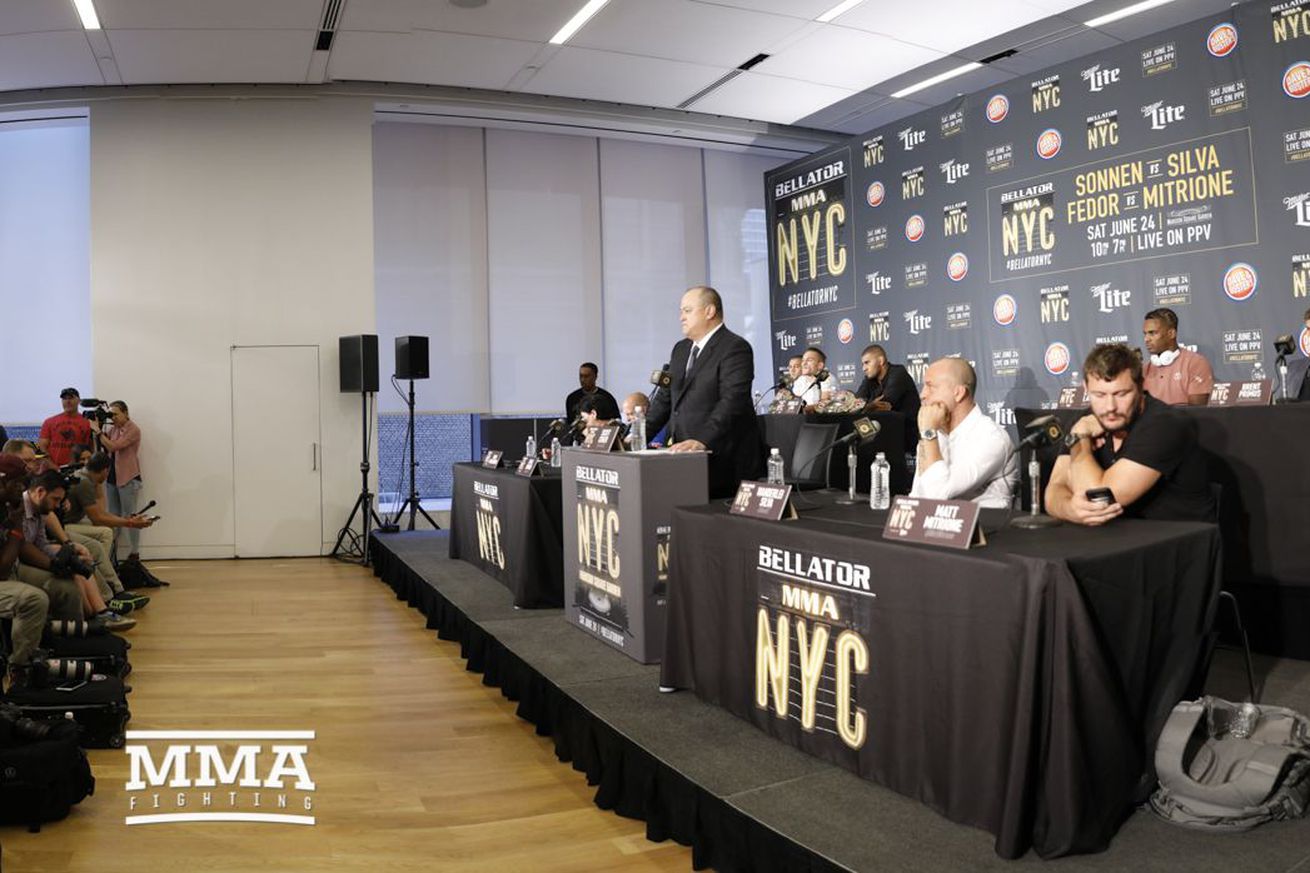 Bob Cook has always been a go-to guy for Scott Coker. The American Kickboxing Academy coach and fighter manager brought Daniel Cormier to Strikeforce and told Coker about the likes of Tyron Woodley, Ronda Rousey and Luke Rockhold.

In 2015, “Crazy Bob” was in Coker’s ear again about the latest can’t-miss prospect.

“This guys has always delivered on talent,” Coker told MMA Fighting. “He comes to me two years ago and says, ‘Scott, I’ve got the kid and this kid is gonna be the best fighter ever in the history of MMA.’ I’m like, yeah, yeah, yeah, send me some tape.”

Then Cook told Coker his age — then just 17 years old — and his résumé. Aaron Pico is a world-class wrestler and a national junior Golden Gloves champion. Coker saw the tape he asked for and witnessed firsthand Pico’s work ethic. 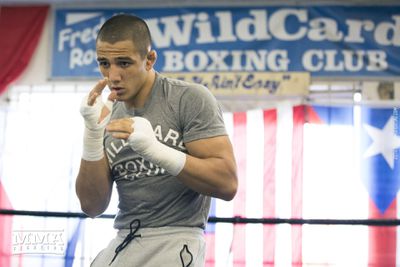 It wasn’t long after that Coker and Bellator did something uncommon in mixed martial arts, signing Pico to something of a development contract. Everyone knew Pico wouldn’t be fighting for some time, focusing on trying to make the Olympic wrestling team. But they also knew he was worth the wait.

“I think he’s the biggest prospect in the history of MMA, period,” Coker said.

That, in a nutshell, was what Bellator was in 2015: very much in the building stage. Setting itself up for the future.

Now, the future has arrived and Pico is right on time. The MMA prodigy will make his pro debut against Zach Freeman at Bellator NYC on Saturday night at New York’s Madison Square Garden. It’s the first pay-per-view card of Bellator’s Coker Era, led off by a stacked Spike TV event dubbed Bellator 180.

Coker sees his three-year tenure as Bellator’s president in phases. The first, in 2014, was scrapping the old tournament format and upgrading the venues, from small ballrooms to well-known arenas. In 2015 and 2016, Coker said the goal was to put in place the best possible staff together behind the scenes and start making a play for free agents.

‘I think [Pico is] the biggest prospect in the history of MMA, period.’ -Coker

Phil Davis and Benson Henderson, then top contenders in the UFC, were the first to jump. Henderson is a former UFC lightweight champion who headlined many events on cable and pay-per-view. After they came aboard, Coker believes Bellator cemented itself as a legitimate destination and others, like Matt Mitrione, Chael Sonnen and Rory MacDonald followed.

On the business side, 2016 was also very much about expanding internationally, a major goal for Viacom and Spike, Coker said. Bellator has done 10 international cards since the beginning of 2016. It hadn’t done a single one previously.

The next phase is now and pay-per-view is the new frontier. Bellator won’t do one every month, like the UFC does, Coker said, but will put cards on PPV when it is warranted.

“I think this is the time we’re gonna continue building this into a pay-per-view product for 2018 and ’19 and we’ll probably go to two fights [per year], then three fights and then four fights,” Coker said. “But we’re not gonna be in the monthly fight business doing pay-per-views unless it makes sense.

“We’re gonna be on there when the fights matter. And when there’s a reason to do a pay-per-view fight, then we’ll just blow it up like we did this event and put top to bottom, maybe four or five just amazing fights that people want to see and a fight card that has something for everybody.” 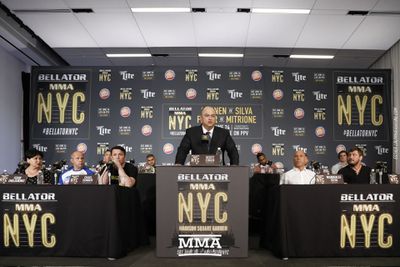 Bellator NYC is the most loaded event the promotion has even done. Sonnen is headlining against longtime rival Wanderlei Silva. Fedor Emelianenko makes his Bellator debut against Matt Mitrione in the co-main event. There are two title fights — Michael Chandler vs. Brent Primus and Douglas Lima vs. Lorenz Larkin — plus the introduction of Pico.

Before all that on Spike, Davis will defend his light heavyweight title against fellow UFC veteran Ryan Bader; prospect James Gallagher, the teammate of Conor McGregor, will face Chinzo Machida, the brother of Lyoto Machida; and women’s boxing star Heather Hardy will make her first foray into MMA.

“I think that for Bellator to develop into a pay-per-view business and really grow the pay-per-view business, I think you have to put your best foot forward,” Coker said. “When you think about this fight card from top to bottom, we have something for everybody and even Bellator 180, leading up to the pay per view, that’s an amazing fight card on his own.

The UFC charges $10 more for cards on pay-per-view. Coker has noted several times in the lead up to this card that it is the best PPV of the year so far, regardless of company. That might be true, though multiple UFC events are likely to outsell Bellator due to the promotion’s name value and marketing reach. Even if it isn’t true, the fact that there is even an argument is a testament to how far Bellator has come.

“This has been built into a premium MMA brand now,” Coker said. “It’s not the brand it was three years ago.”

‘This has been built into a premium MMA brand now. It’s not the brand it was three years ago.’ -Coker

Coker doesn’t even want to talk about the UFC. He said he doesn’t think about the other game in town when he’s making decisions for Bellator. He’s not looking at the UFC as a measuring stick.

“Look at our ratings, look at the fighters we’ve been signing, look at the commitment we have behind the venues we’ve been going to and the worldwide expansion,” Coker said. “We’re growing into a healthy, robust business and you don’t have to mention any other martial arts organizations. We’re our own 300-pound gorilla, that’s how I feel.

“As free agency keeps opening up, you’ll see more fighters jumping ship. Because at the end of the day, they want to go where they’re respected, they’re treated well and they’re paid well. That’s gonna be Bellator.”

Could Bellator ever surpass the UFC? Or at least draw even in the eyes of fans? Coker doesn’t lose sleep at night thinking about that, he said.

“The comparison, though, to me it’s just not something that I focus on,” Coker said. “I don’t wake up every day and worry about it. But I will tell you this, there’s a lot more chatter about Bellator than there’s ever been since I’ve been here. That’s why I’m excited. It’s not what somebody else is doing, it’s, ‘Hey, what are we doing right?’ And one day, you could never say never. This is free enterprise. At the end of the day, is it a fighters league where fighters matter most? I believe it is.” 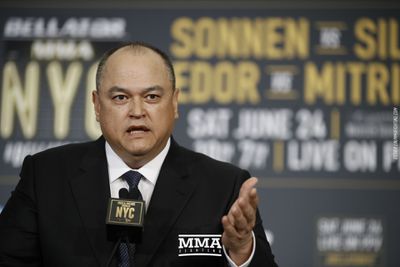 Coker, matchmaker Rich Chou and company have drawn solid ratings over the last two years, especially with cards focused on legends who have made their names elsewhere. Sonnen and Silva are in that same category. But the emphasis on those kinds of fights is dissipating. Coker said he has always seen himself as a bottom-up type of builder. That’s why Pico and other top prospects like Ed Ruth, AJ McKee, Joey Davis, Tyrell Fortune and Jardo Trice have been signed at young ages.

What Coker calls “legends fights” or “fun fights” will never fully go away. They are part of the strategy he learned while working for K-1 in Japan. But there is a youth movement coming in this phase of things and Pico is the brightest light yet.

Coker might be able to say the same thing about Bellator, at least this new phase of growth.

“I’m just excited,” he said. “If this is where we are now, where are we gonna be in the next two or three years? I think the sky is the limit.”