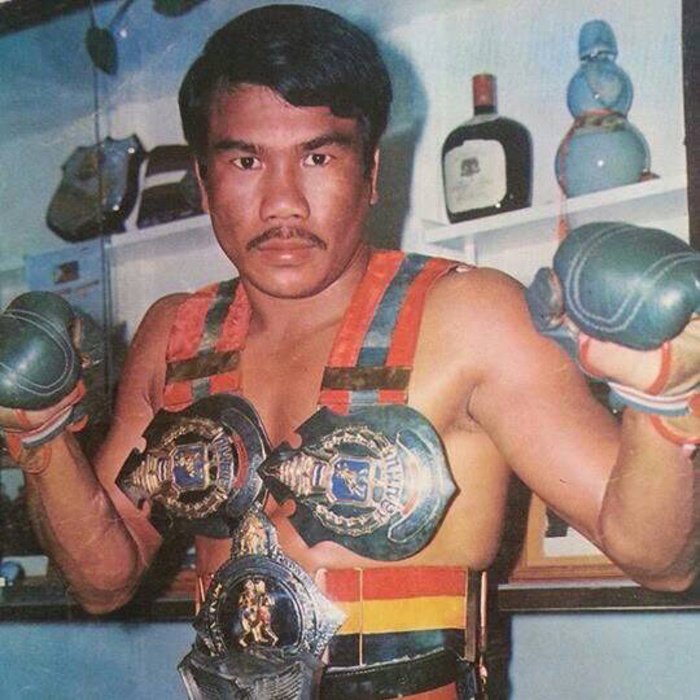 Photos courtesy of the author

They seek him here, they seek him there, those kickboxers seek him everywhere. Is he in Heaven? Is he in Hell? That damned, elusive pimpernel of Muay Thai Buriram Suanmisakawan!

As a trainer, the hard-hitting 147lb champ from the 1970s has become a bit of an inside tip in the world of Muay Thai, with many big name nak muay farang (foreign kickboxers), and MMA strikers, going to Bangkok to track down the veteran ass kicker to learn a thing or two about the old one-two.

And when it comes to the Scarlet Pimpernel of Muay Thai, I must declare a vested interest in the subject matter. Last decade, quite by chance, I stumbled across this ring legend in the sweaty gyms of Bangkok’s notorious slaughterhouse district. There he was, with his trademark Charles Bronson moustache, stately and proud, solid as a mountain, strong as an ox, holding an aged set of Thai pads, and bashing some old time ring craft into the knuckleheads of a new generation of nak muay, both foreign and domestic.

I scratched my eyes, blinked twice and clicked my heels three times. Was it really Buriram, the steely welterweight who waged his own life in search of the great way? The man with four championship belts at 147lbs, including two from Lumpini stadium and one from Rajadamnern? Yes, it really was him strutting the ring with the proud arrogance of a lion, watching the comings and goings of the gym with the eye of a hawk. It was Buriram in the wild alright, not some black and white figure from a fuzzy old VHS tape back home in London town.

Not many men who climbed to the top and put their name in the clouds have the ego to make the downward transition ….View full article