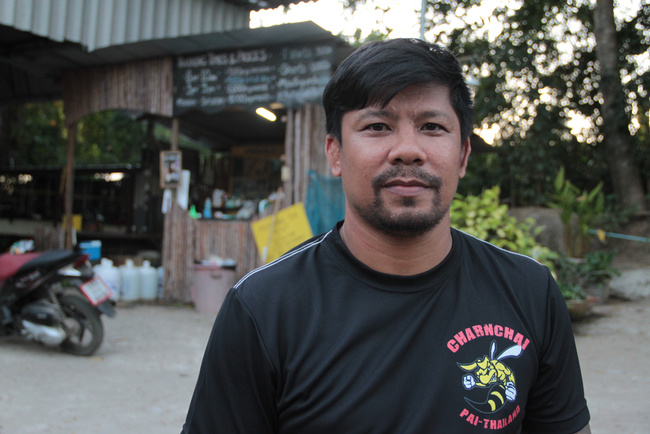 When I was younger, in my twenties, sometimes I would fight twice a day.

We would go back to Isaan, find festivals, and bet on ourselves. One time, I got cut from an elbow at a temple festival in Surin, but the fight wasn’t stopped and I still won 30,000 baht.

Same day, later that night, I fought another guy. He saw I had been cut and said he wanted to fight, so we bet 50,000 baht, winner take all. I won that one too.

If you ask him about his early Muay Thai career, 41-year-old Roekngam “Bee” Chomthong will tell you, “I started Muay Thai when I was 10 because there was no money.”

There’s a bit of money now though, which Bee owes to his perseverance with Muay Thai. Thirty years after Bee first began fighting, he now owns a successful business: a gym he named Charn Chai after his grandfather, also a fighter. Located in mountainous northern Thailand, Charn Chai Muay Thai receives a steady stream of hobbyists and professional fighters from around the world. Many of the students come back to Thailand and to Charn Chai, year after year. Why? “Because we’re like a family,” Bee says.

It’s true, Charn Chai is something of a family operation. Bee’s wife and children are common sights around the gym. Bee’s father, Kak, walks around the grounds with cell phone and coffee cup in hand, talking slang in English with the foreigners, retreating to the outside kitchen to cook large meals for the students twice a day. It’s fitting for Bee’s father to be there with him. After all, his father was his first trainer, the one who took him to his earliest matches, and the one who taught him about heart.

Like so many of Thailand’s Muay ….View full article