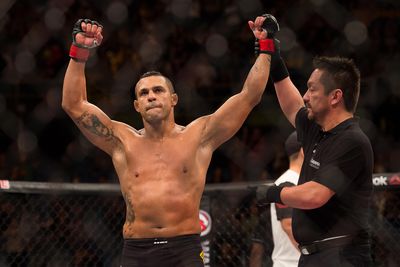 The most drastic version of Vitor Belfort — the spirit-run berserker of 2013 — knocked Dan Henderson at a time when Dan Henderson never got knocked out. Two years later, the more believable-looking version blasted Henderson again, just for good measure. This time Belfort wasn’t on TRT. Neither was Hendo. But Hendo was still 45 damn years old, a shotgun shell left over from the hootenanny days of spring.

At just 38 years old, Belfort lives on. You can drag him through the mud, hurl asterisks at him until your arm gives out, counter his righteousness with wrongeousness, try to stick a (pitch)fork in him — but he’s back on them rungs, baby. He’s going to be part of your life, whether you like it or not. He’s a fight game Kardashian.

You knew going into Saturday night’s fight card that whichever story line emerged was going to take some time to digest. If Hendo won, my god. Yet if Belfort won, my god my god my god. Belfort said beforehand that he believed he had one more title run in him, bringing his grand total of title runs to ….View original article