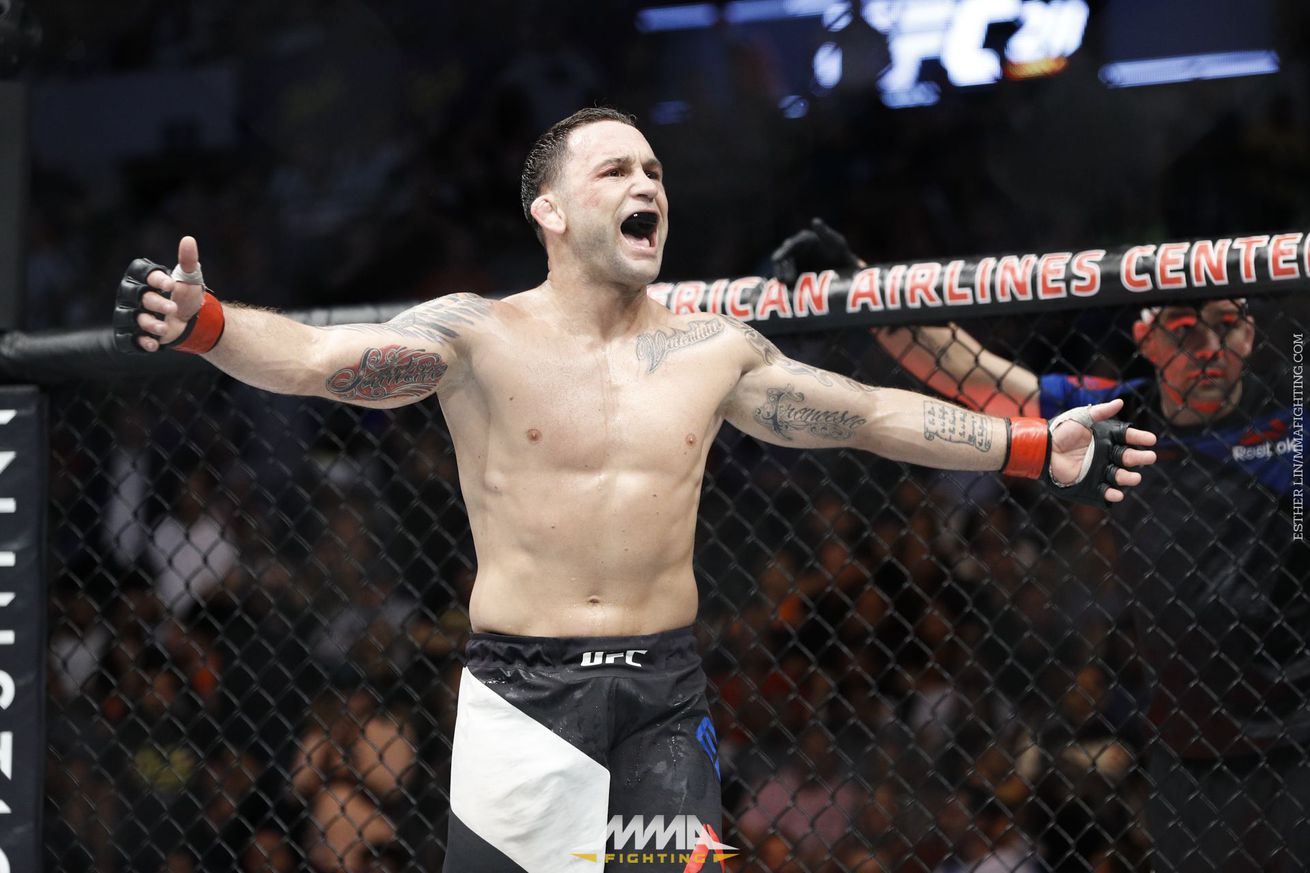 Maybe one day we’ll look back at the UFC’s springtime visit to Dallas as the weekend the promotion woke up from its deep slumber. It was one big return to the glorious dysfunctional family that has so endeared itself to gawkers from all walks of life. There was fresh-faced Justin Gaethje, sitting among his new family during the summer kick-off presser like none other than Boba Freaking Fett, promising Michael Johnson a beating. There was Johnson saying he doesn’t eat feces piecemeal, but rather whole, like an OG. And then there was the OG himself, Kevin Lee, inciting an afternoon riot with Michael Chiesa, thus pumping life into an otherwise pedestrian booking.

If that weren’t enough, Daniel Cormier invited Jon Jones to kindly stop sandbagging prostitutes long enough to fight, while Jones reminded Cormier that he beat him after “a weekend of cocaine.” This is what the sport is all about. Questionable taste, deceit, public confessions and ass kickings in pending!

And that was just Friday.

By the time the UFC 211 fights came around, we already had our bearings. For a moment, Michael Bisping’s belt — which has been trying to communicate, emitting warbling cries of distress from the dimension it’s trapped in — dangled once again in this very reality. His bout with Georges St-Pierre appears to be off, while a real life contender has emerged in Yoel Romero. A Bisping title defense against the No. 1 contender? This begins to border on “logical.” And in 2017, that seems absurd.

Meanwhile, Dana White was meeting with Conor McGregor to square up his side of the Floyd Mayweather bout, and the familiar pomp of the UFC president’s progress was on his face. What was even better was that White was saying stuff again, stuff like Luke Rockhold needs to earn his next title shot — that in the UFC people aren’t just handed opportunities. Never mind that you can virtually trip over the hundreds of contradictions to be found in that single statement, that, ladies and gentlemen, is a pulse! White was White again, saying things with authority as if context is nothing more than a two-ton batch of hooey.

That was all Saturday night, after the fights.

The fights themselves? Gangbusters.

We had a bit of everything. There was the natural controversy in Eddie Alvarez’s fight with Dustin Poirier, in which Alvarez slammed home an illegal knee (or two), which in Texas, operating under the old rules, was confusing as hell. Illegal? Most distinctly yes. Accidental? Absolutely not, but officially yes (though there’s an appeal). What would an event be without a knot to untie? The confusion prompted former owner Lorenzo Fertitta (!) to text Dana White that there needs to be instant replay. You know what that Poirier-Alvarez fight was? Needed. Controversy is the lifeblood of the sport. Herb Dean, bless his heart, has come to feed our need of controversy like a provider.

Perhaps that fight would have gone down in infamy if it weren’t for Jason Knight blowing up Chas Kelly (and asking for Fitty G’s), or James Vick taking out Polo Reyes (and asking for some shine). David Branch returned successfully, pouring sludge over Krzysztof Jotko, and that threatened to throw things off, but then Frankie Edgar showed up like a buzz saw, and just beat the living daylights out of Yair Rodriguez. That was one of the most impressive Y’all Must’ve Forgot showings of the year. The quiet Edgar, forever second in the McGregor sweepstakes, taking out frustration on a Next Big Thing. And he did it with a heavy heart, for his longtime friend, coach and training partner Nick Catone, who lost his 18-month old child this past week.

Edgar restored order. So did perennial welterweight contender Demian Maia, who had to navigate one last minefield in the form of Jorge Masvidal before a title shot, and he did so most gingerly. Maia took some punishment this time, but he ultimately got the split decision and a promise of a date with Tyron Woodley. Will he actually get it? I mean, it’s 50-50 — one of the UFC’s favorite pastimes is to do the old Charlie Brown football trick when it comes to Edgar and Maia. Soon as they run up on the ball, yank it away. It’s wait and see.

The lasting image of Dallas is that, through all it all, the champions — Joanna Jedrzejczyk and Stipe Miocic — left with the same belts they came in with. Miocic knocked out Junior dos Santos to tie the heavyweight record of two title defenses, which is complicated feat (as in both a thing to be truly appreciated, and a thing to be marveled at — two is an unimpressive number that tells you all you need to know about the butcher shop known as the “heavyweight division”).

Jedrzejczyk? Holy [Michael Johnson entrée]. She rendered Jessica Andrade helpless using the inside leg kicks and a spring-loaded left jab. When Andrade flinched to guard either, there was an incoming head kick to be wary of. In close, it was elbows. Knees. At turns, the unleashed right. Andrade was trying to solve a Rubik’s Cube in the dark. For everything that Ronda Rousey was in terms of quick berserker maulings, Jedrzejczyk is in technique. She is a prototype for execution; nobody thrives better in chaos.

And on a chaotic weekend, in which so much went on — fights being made, rivalries being reinforced, fights being fought in perfect ways, White being White, Joe Silva disappearing into the Hall of Fame, an in-cage proposal of marriage from Andrade wearing fresh welts on her face, so much else — Jedrzejczyk stood out as the centerpiece. It was a wild weekend in Dallas.