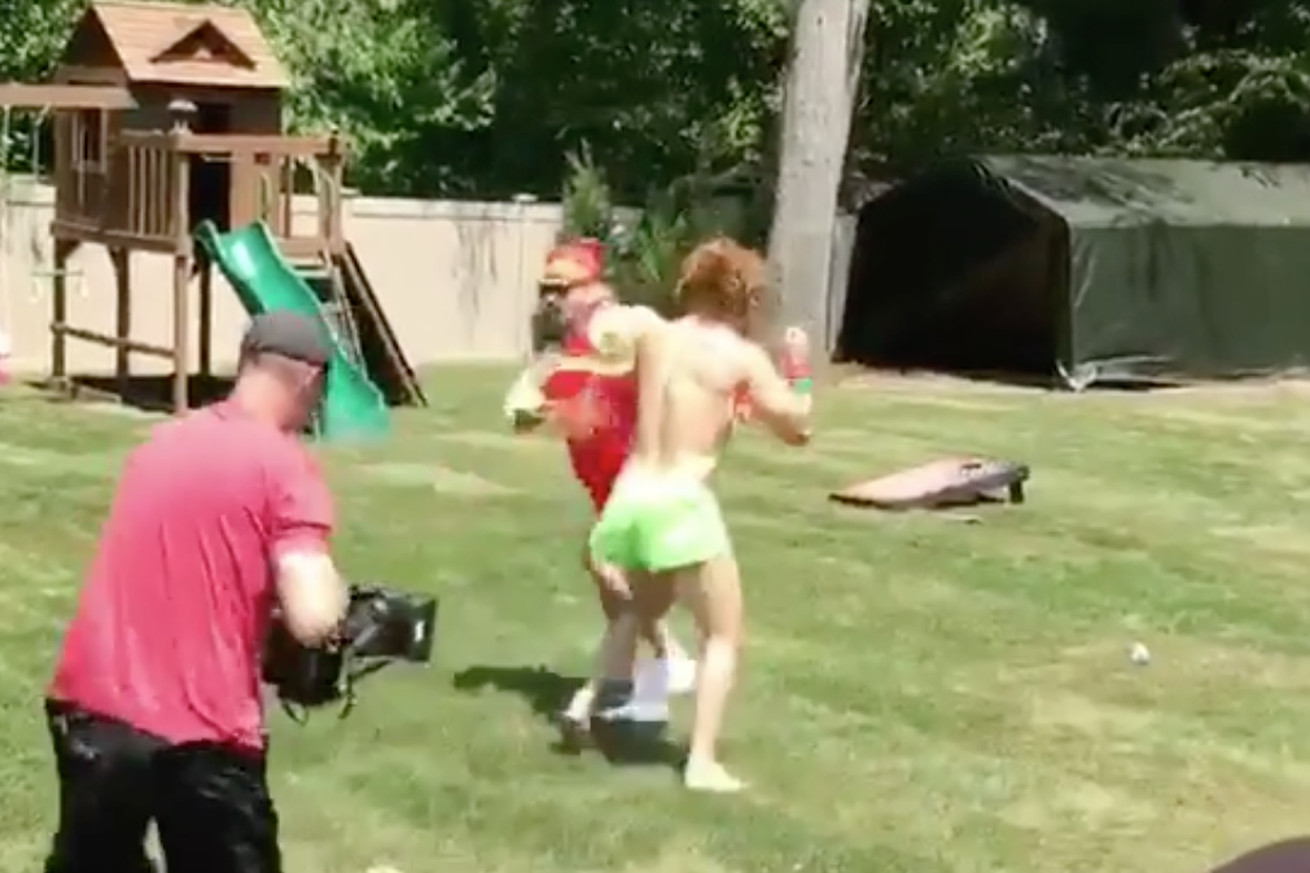 As if getting punched, kicked, kneed, choked and twisted into a pretzel on a regular basis isn’t enough, fighters attract a general wackiness that makes their lives, well…interesting.

To commemorate these day-to-day hardships, slip-ups, pranks, and more, we bring you, “The Weekly Grind.”

Me as Ultimate warrior and @gpvillante as Hulk Hogan #cjsbirthdayparty

If you’re going through a storm, keep going.

How to confuse your dog And yes, I am rockin Ripley’s @reebok alien stompers

Keeping my mama @annmaria7gen warm when she stopped by #BOTNS

The difference between you and I. I’ve punished the motherfuckers I thought were on steroids. You protect your pride with lies

U are right u punish cheaters. U took no pity on urself did you. U constantly punish urself lol. I punish you next. I’ll give u a break lol https://t.co/YBe4eBUeNl

Huge shout out to all the boys on the west side of the island! Thank you to @blessedmma and @yancymedeiros for letting us kick it on your beach! #blessedera

U can have great achievments but if u grass on people that made u, u are nothing but a rat for the rest of your life #MightyRat

Today is a pool party at the @familiabelfort house. we are celebrating @kyarabelfort 8 years old. I confess that she loves the camera and she loves people, she ask to talk to all of you. Later I will post some footage from the party. Happy Saturday to all of you!!! Hoje vai ser a festa da piscina aqui na casa da @familiabelfort . Hoje estamos celebrando os 8 anos da @kyarabelfort , eu confesso que a Kika ama uma camera, ela é um artista. Ela pediu para falar com vcs , ela ama a humanidade mais tarde postaremos a festa. Bom fim de semana a todos vcs.

Tá ficando pronta a grande festa. A chuva não vai parar a festa. Pois aqui ninguém é feito de açúcar, somos doce mais não dissolvemos não hahahaha. The party is almost ready. Even the rain can’t stop the party. We are very sweet but we are no sugar so the sun and rain are welcome !!!!

A vitória pediu para suas amigas dormirem aqui em casa? E lógico que disse que sim, mas para isso acontecer teriam que fazer algo, e elas toparam aí segue o desafio. @belfortfitnesslifestyle @belfortgym_barra @familiabelfort @vitoriabelfortoficial ask to her friends to have a sleepover , and I say yes , but they had to do something first, and they did. No sacrifice no Glory.

People will stare. Make it worth their while. Here is another badass watch by Bomberg. Neon Fuchsia, bold, sexy and versatile @bombergofficial #bombergwarriors #leadersnotfollowers #watchporn #ufc #swissmade #versatility #bombergofficial #teamclaudia

We had a great time in Singapore thank you for all the love!!! Can’t wait for #ufcsingapore it’s gonna be great!!!

It was great work out with @nzwarriors! Thank you for showing me your Haka. Good luck on the rest of the season! @monsterenergy @hansmolenkamp

@rosendo_sanchez stepped his game up LA style for the media. Day look at his jeans. Wow. Amazing shoes with the little spikes. I guess when ur in LA u are LA!

Getting ready for War

Do to recent events I will no longer be doing any public appearances unless show fee is collected before appearance. More details soon

Spent the week being escorted around Iraq by Erbil’s employee of the month, @chuggins98. Go give him a follow… since we just forced him to make an Instagram. Who doesn’t have one of those by this point?

Losing is part of this fight game. Saturday night takes nothing away from his legacy. This is a guy who would show up to his gym sometimes without eating in the last day because he was so damn poor. This is a guy who built the 45 division and became king. This is a guy who found motivation to keep earning what he already had. He defended his throne. For a decade. For honor. For his team. For his countrymen. This is a guy who didn’t start at pole position in this world and look at what he achieved. Brazil needs to celebrate that man. Acai with powered milk and cashews for everyone. He’s a GOAT, and his story will always be an inspiration to me and people of Hawaii. Obrigado, Ze @josealdojunioroficial Obrigado.

Por várias vezes me vi de cabeça baixa e levantei por ter a honra de ver este homem trabalhar. Por várias vezes me inspirei nas suas habilidades. Por inúmeras vezes escutei as palavras que precisava de um campeão que já não teve nada para comer e se superou. Construiu uma família, um time e ganhou o respeito do mundo inteiro. Parabéns pelo seu legado. #respeito Several times I had my had down and I got up for having the honor of seeing this man work. Several times I was inspired by his abilities. For countless times I heard the words that I needed from a champion who had nothing to eat and got over it. He built a family, a team and earned the respect of the whole world. Congratulations on your legacy. #Respect #respectall #foreverchampion

Dont mean 2 kick u while ur down,but realistically I am as close to Conor as u could get. Forget everything and lets do it! It’be an honour

With a win over Bethe she will be 1-3 in her last 4 fights and her last PPV only did 200k now she is on @UFCFightPass whats the right offer?

Just surfing with my Girl Luna