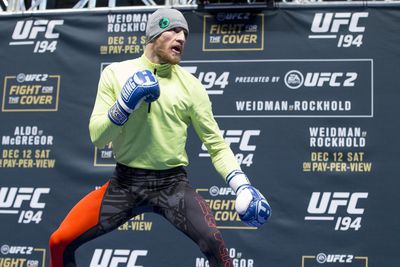 LAS VEGAS – Perhaps the surest way to pipe down the raging Irish is to bring in a movement coach and perform new age undulations on stage. Conor McGregor did on Thursday at the UFC 194 open workouts at the MGM Grand Garden Arena. McGregor’s movement coach Ido Portal accompanied him on stage, and together they performed tantric bear crawls to a day-drinking crowd, all of them ready to sing their hero into flight.

Where was his coach John Kavanagh? Somewhere off stage, away from the…what, like, was it an infomercial? There was some mitt-work to be found in the middle between him and Owen Roddy, but for the most part it was one bearded dude (Portal) showing another bearded dude (McGregor) how to change aural colors through hip movement.

That was a first.

And if we’re being honest, McGregor’s lead up to UFC 194 has been little strange. With the four participants — Chris Weidman, Luke Rockhold, Jose Aldo and McGregor — there for showcase purposes only, none was more anticipated than “The Notorious” one. The Irish who made their way to Las Vegas were already in full throat on Thursday, confusing the hell out of the NFR stragglers that stopped in to see what the hubbub was all about. They came out even harder at Friday’s weigh-ins, many waving red panties to signify what kind of night it would be.

But those who’ve made the trek across the pond have encountered the Zen McGregor, the one who starts his sentences with “I feel…”

The bombastic McGregor that was ready to tear Aldo’s head off back in July has become — perhaps deceivingly and maybe tactically — just somebody that we used to know. His face was sunken in considerably on the scale, moreso than usual, and the ….View full article