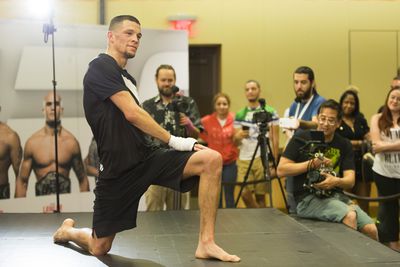 ORLANDO – Nate Diaz is the last of the Diaz clan still eligible to fight, which therefore makes him a kind of national treasure. It’s been a year since Diaz last competed, and when he did he lost to Raphael dos Anjos in a non-competitive bout after missing weight by a considerable number. Try telling that to last pillar of Stockton. A year removed from that, Diaz told the media in Florida on Thursday that he was fighting at ten percent that night and Dos Anjos still couldn’t finish him.

“Remember the slap?” he said, waving his hand to demonstrate. “I said, you might win but you ain’t going to finish me motherf*cker. He got mad and threw a little temper tantrum, did you see him? He was mad. I pissed him off. Sorry about that.”

Diaz is one of the few fighters on the UFC roster who can show up with a single win in three-and-a-half years and complain that the carpet isn’t as red as it should be under his feet. Another way of saying that, Diaz is one of the last few loveable figures in the fight game. Like his brother, he transcends wins and losses, and the concept of point-fighting is sacrilegious. He has nothing to do with what you might call the norm, and represents both the heartbeat and the fringe of the sport. Every time he talks, his middle fingers instinctively begin springing to life. He can’t help it. His grudges and grievances mix deftly with his loyalties and gratitudes.

The dude is a joy to cover.

And he was in a good mood on Thursday, rolling in with his suspended brother Nick and his NorCal faction. Never mind that he doesn’t necessarily like media, he complained about the turnout for UFC on FOX ….View full article