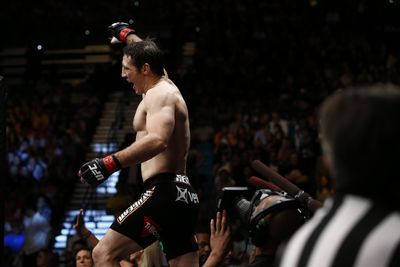 Over the last year, Tim Kennedy has said that he wasn’t interested in returning to the UFC unless there was a compelling matchup for him, someone he really wanted to get his hands on.

That has changed. There isn’t any one particular person Kennedy wants to fight. There’s a whole bunch of them.

The popular UFC middleweight and Army Special Forces veteran told Ariel Helwani on Monday’s edition of The MMA Hour that he will indeed return to the Octagon. And he’s targeting matchups with past performance-enhancing drug and testosterone replacement therapy (TRT) users. Kennedy named the likes of Vitor Belfort, Dan Henderson and Anderson Silva on his wishlist.

“I want to go fight every single one of them and beat the brakes off of them and kind of put a big exclamation mark that this is a new era of the sport, that the clean athletes, we’re going to smash every single one of you cheaters that have historically been making all the big money and cheating your way through it,” Kennedy said.

There is no specific timetable for his return. But Kennedy (18-5) said that the UFC has been open to him facing the winner of the trilogy ….View original article