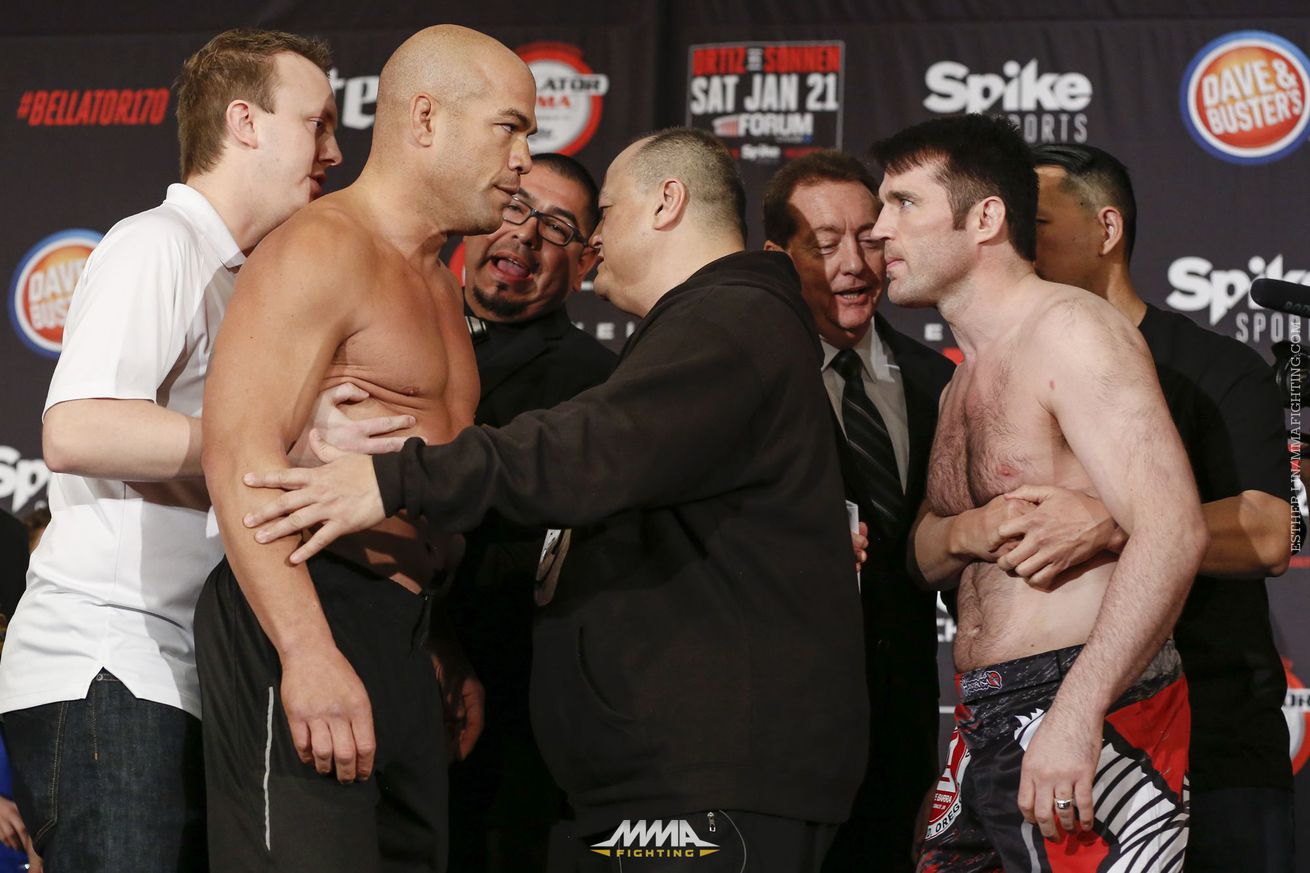 Tito Ortiz’s retirement fight with Chael Sonnen on Saturday led Bellator to its third most-watched broadcast in its history.

The three-hour plus show averaged 1,374,000 viewers, putting it behind the 1,964,000 viewers for the Feb. 2016 show that featured bouts between Royce Gracie vs. Ken Shamrock and the late Kimbo Slice vs. Dada 5000, and the 1,580,000 viewers that tuned in for the June 2015 show headlined by Slice vs. Shamrock. Saturday night’s number was slightly ahead of the 1.2 million viewer average for the Nov. 2014 show headlined by Ortiz vs. Stephan Bonnar.

The main event itself averaged 1.85 million viewers, making it the fourth most-watched fight in company history, trailing only Slice vs. Dada (2.5 million), Gracie vs. Shamrock (2.4 million) and Shamrock vs. Slice (2.3 million). The peak rating for the fight — as well as numbers including DVR viewership — should be available later in the week.

Bellator was the most-watched show on cable television for the night in the 18-49 male demographic, and second-highest overall in the 18-49 demo.

For a comparison, in 2016 only five UFC television events did bigger numbers, and most of those were prelims ahead of monster pay-per-views (UFC 196, 200, 205 and 207). The only other show to do a bigger number was the FOX Sports 1 fight night featuring Dominick Cruz versus T.J. Dillashaw for the bantamweight title.

The positive sign is that the Paul Daley first-round flying knee knockout of Brennan Ward did 1.7 million viewers. During the broadcast, the announcers pushed the idea that while Ortiz vs. Sonnen was the main event, that to the insiders and the fighters, Daley vs. Ward was the fight everyone was looking forward to.

It’s key because if Ortiz stays retired — and he just turned 42 on Monday — most of the key components that have drawn Bellator’s biggest numbers are unlikely to fight again. It’s imperative for Bellator’s future that the fans who watch the name fighters of the past take notice of a few fighters on the undercards.

Saturday also marked Sonnen’s first fight with the promotion. Sonnen had pushed the narrative in the buildup that he was looking to fight Wanderlei Silva, a major grudge fight that the UFC attempted to put together, but never materialized. Silva was suspended for fleeing the scene of a random drug test and was later released by UFC.

Silva hasn’t fought since a May 2013 win over Brian Stann. His three-year suspension ends on May 25. However, Silva pulled out of a December fight with Mirko Cro Cop for Rizin in Japan, where MMA isn’t regulated and thus suspended fighters are allowed to compete.

Spike TV also reported that the Bellator 170 prelims drew the second-most viewers in history on the Bellator web site, trailing the February 19, 2016 show. The post-fight press conference on YouTube saw the most concurrent viewers for any event in the history of the promotion.

Bellator was also the No. 1 trending topic on Twitter during the event.

On Saturday, Tito Ortiz was the second-most searched for topic of the day on Google, with more than 200,000 searches, behind only the women’s matches.