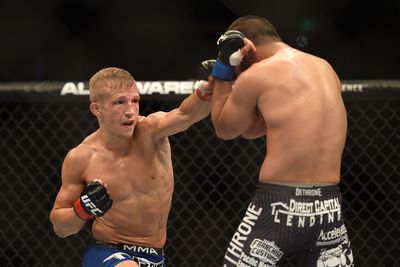 According to Cruz, Dillashaw took more than one page out of his book and downright stole his techniques, which includes a heavy dosage of foot movement.

Not so, says T.J., as he insists their techniques are vastly different because while he’s trying to knock people out, “The Dominator” — it seems — is trying out for the next season of “Dancing with the Stars.”

“The Viper” broke it down to Sherdog:

“It’s funny, he’s going back and forth trying to find something to talk about and he’s kind of being a hypocrite. Before he was saying I was copying him, now he’s saying he’s different. I don’t even know if he can decide on what he really wants to say. The difference is that I am a lot more aggressive fighter. I think he’s trying out for ‘Dancing with the Stars.’ He’s moving around, with pop shots and not wanting to get hit. Which is a good strategy, obviously, but he’s not fighting, he’s not entertaining. I’m not only here to win, but entertain and to knock him out.”

The mixed martial arts (MMA) world will finally get to see whose style is better, as the two combatants are scheduled to collide in the main event of UFC Fight Night 81 on Jan. 17, 2016 in Boston, Mass.

And it will behoove fight fans to not blink, as this bout — according to Duane Ludwig — won’t be going the distance.

To see the most updated UFC Fight Night 81 lineup — which includes a lightweight showdown between Anthony Pettis and Eddie Alvarez — click here.