Home MMA News To keep up with Vitor Belfort, one must battle fatigue
ShareTweet 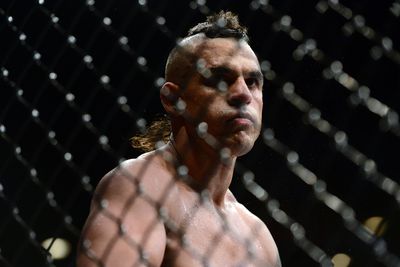 Vitor Belfort hasn’t been the lesser controversial figure in a fight equation since UFC 142, back when the behemoth Anthony Johnson couldn’t squeeze into his middleweight trunks. Since that time it’s been one grand inquiry into the “Phenom,” who camps somewhere between the letters WWJD and TRT. Whenever Belfort is preparing for a fight, media gets to juggling his asterisks. At some point, it gets as old as the old lion himself.

He doesn’t like it. And neither do we. Vitor and the Surrounding Questions is not exactly a feel-good dynamic during Fight Weeeeeeek! It’s just a thing that must be endured on both sides.

Things are no different heading into his main event bout with the 45-year old Dan Henderson — a former-TRT recipient — who should be the ricketier story line in play. Should be, if it weren’t for Belfort, who can overshadow any man’s vulnerabilities and outchecker the most checkered of pasts.

This time Belfort, quietly going about his life of reshaping into a more believable version of 38-year man, had some old biographical details squirm back into existence that are just…like, well, actually pretty exhausting. The news came via a Deadspin article ….View original article