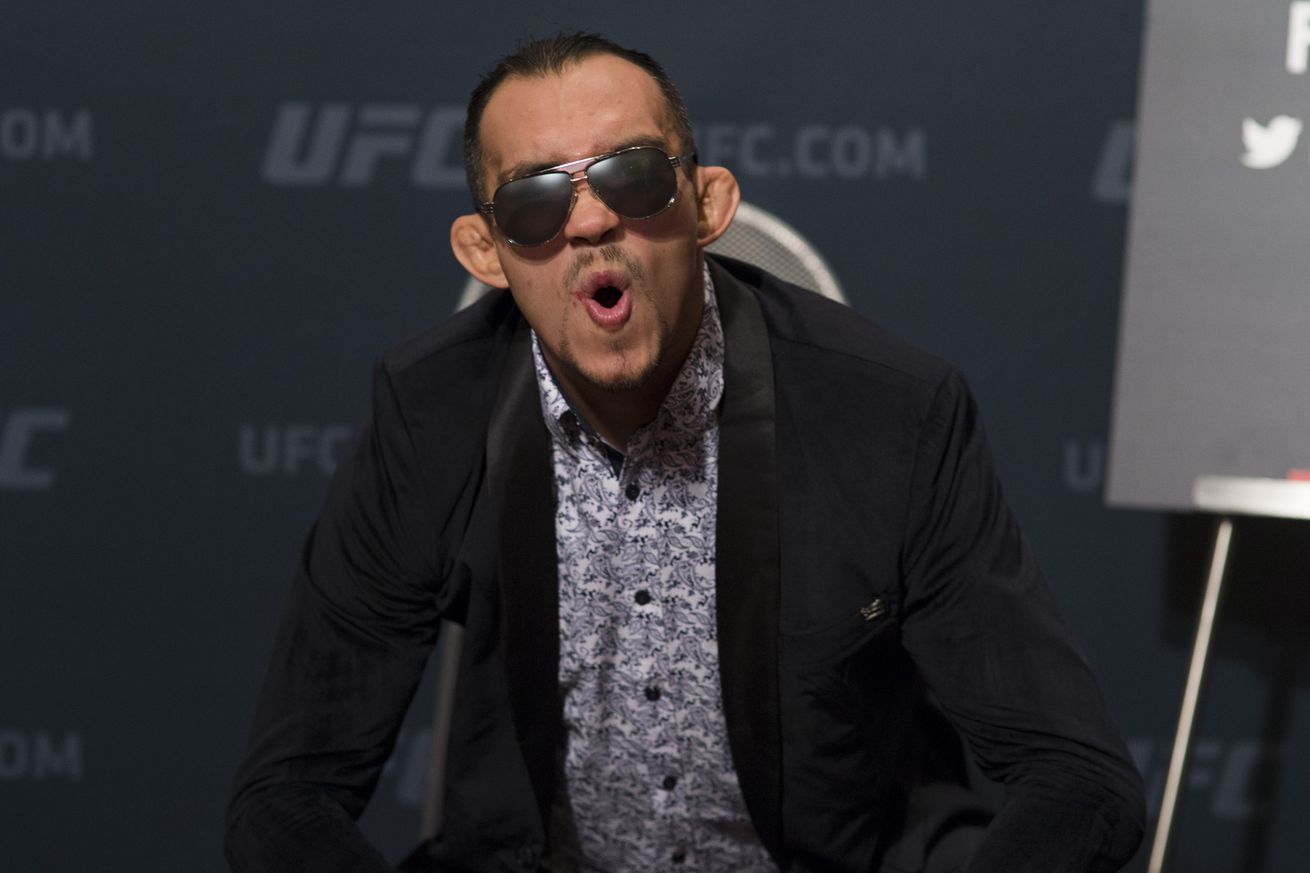 Tony Ferguson is presently in limbo, awaiting his next move as the assumed No. 1 contender for the UFC lightweight belt, but he’s at least had a few distractions to occupy his time of late.

Chief among those distractions was a surprise callout from top-15 ranked Al Iaquinta, who made Ferguson the target of one of his many recent social media rants this past week. Iaquinta and Ferguson got into a Twitter spat after Iaquinta tweeted that he would “just have to beat the f*ck out of” Ferguson. Iaquinta then doubled down Monday on The MMA Hour, closing his interview by proclaiming, “Tony Ferguson, you’re a little b*tch. I’ll f*cking knock you out so fast, you f*cking p*ssy.”

All of this beef was news to Ferguson, who had no idea Iaquinta was angling against him until he was directed towards Iaquinta’s tweets by fans.

From the outside, it seemed like Ferguson was more caught in Iaquinta’s shotgun-spread approach to social media callouts, rather than the beef being anything personal. So it’s no surprise that Ferguson isn’t taking Iaquinta’s words seriously.

“I don’t know, maybe he talked to the guys over at the UFC retreat,” Ferguson said. “He’s trying to promote himself, trying to make it big. You’ve never heard this dude, not one time, call my name out. I’ve never called his name out. So obviously somebody got to him. So regardless, if he wants to fight, I’m not going to back down from a fight, but I already offered somebody a fight (Nate Diaz) and I’m not trying to go backwards. I’m moving forwards. I’m a champ. I’m a superstar. And I move like a superstar in that Octagon, and I expect somebody to move like that when they signed that dotted line with me.

“Don’t give me an easy fight. I want somebody that’s worth it, that’s put in their time and put in the amount of effort. It’s not just about knockouts, son. This is mixed martial arts. It’s about finishing people. It’s about putting in that time, putting in all five rounds.”

Ferguson has won a division-best nine consecutive fights and is widely considered the be the top contender in the 155-pound class after his planned interim title fight against Khabib Nurmagomedov at UFC 209 fell apart at the final minute due to Nurmagomedov’s hospitalization while attempting to make weight.

Ferguson was then offered a fight against Nate Diaz for UFC 213, however Diaz declined the match-up, leaving Ferguson in a holding pattern without an obvious next move. And regardless of what lower-ranked lightweight contenders like Iaquinta say, Ferguson knows exactly what he wants and deserves.

“Let’s go for a title fight, man,” Ferguson said. “I’m nothing f*cking selling nothing for no title. Give me my title shot. Give me my interim. You want to give me an interim belt? Give me an interim belt. You f*cking give, I don’t know who else, an interim belt. Come on, Dana. Let’s go, kid. Let’s make some money. Let’s put this sh*t on paper. Let’s go. Let’s give the fans what they want, a bloody bloodbath. Let’s give them sharp Tony Ferguson elbows coming down like a batarang, man. The D’arce Knight coming at your ass.”

One option for Ferguson is to wait for Nurmagomedov in order to re-schedule the UFC 209 interim title fight that never happened. But that wouldn’t be able to work until after the summer, as Nurmagomedov is still recovering his health and will be fasting daily for Ramadan from late-May to late-June. So while Ferguson still sees Nurmagomedov as unfinished business, he’d rather move on and revisit the fight later rather than sit out and wait.

“I’m about to buy him a gift card for Dolce Diet,” Ferguson said. “I’m about to tweet his ass and say, ‘hey fatty, you pick up a dietician yet?’ Because your ass needs to start worrying and thinking about me and start thinking about your future, because if you say that you’re not going to retire, the Boogeyman ain’t going nowhere, buddy. F*cking Baba Yaga is coming after your ass. I’m the new John Wick still, and I don’t forget about that, because we got unfinished business. But that’s at a later date. He’s not open, because he’s a little b*tch. He doesn’t want to fight before Ramadan. So, I’m not giving him any [criticism] for his religion, I’m not saying anything, but afterwards, I can’t wait. Let’s go. I want some of him.”

Ferguson said he wants fight in July and then in September, and he hopes the UFC can make it happen. He added that he hasn’t personally heard from UFC president Dana White since the situation at UFC 209 went down.

“That was it,” Ferguson said. “There’s no, ‘hey Tony, how’s it going? How’s the kid? How’s the family?’ There’s no, ‘how’s everything going? I know you didn’t do too good on that last fight with Khabib. You know what? Hey, let me show you something.’ There’s nothing like that. There’s no communication on there.

“So, for me, I’m not going to stay busy like that, because I didn’t just get here doing and waiting around for people to do something for me. You get that? I’m a businessman, so I’m going to stay busy no matter what it is. And as far as the fight game goes, I got great management — obviously you know that — so we’re going to handle business the way we have to. And, man, Dana, let’s go, guy. Give me a fight, man. There’s some asses that need to be whooped.