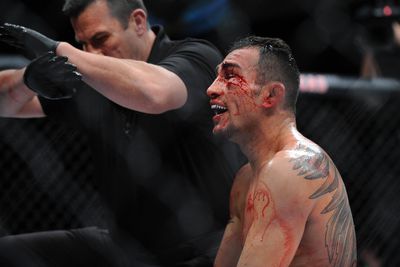 The Ultimate Fighter (TUF) Season 13 winner Tony Ferguson put on a show at “The Cosmopolitan” in Las Vegas, Nevada last night (Fri. Dec. 11, 2015), submitting Edson Barboza in the second round of their sensational “Fight of The Night” at the TUF 22 Finale. With seven straight victories for “El Cucuy,” MMAmania.com ponders what could be next for the rising Lightweight star.

The Ultimate Fighter (TUF) reality show has produced champions, title challengers, and contenders in the last 22 seasons, but there may not be a better fighter to come off the show than Tony Ferguson.

Before you get your pitchforks out, note that “El Cucuy” has gone 10-1 since earning the TUF crown, losing only to Michael Johnson in a highly contested decision back in 2012.

Last night (Fri., Dec. 11, 2015), Ferguson extended his winning streak to seven in a row, putting together an exceptional performance in one of the most exciting fights of the year against Lightweight stalwart Edson Barboza.

From the moment the opening bell sounded, both men stood toe-to-toe, exchanging haymakers in a variety of fashions. It was a bloody, violent, and thrilling bout pitting two of the most exciting Lightweights on the roster against one another.

Ferguson took some of Barboza’s hardest shots — many of which would have crippled other 155-pounders — but answered with his own series of savvy strikes, utilizing everything in his arsenal to give him the upper hand.

The pace was blistering, and Barboza was fading as Ferguson continued to fire away with combinations into the second round. When the Brazilian dove in for an ill-fated takedown, “El Cucuy” locked in his signature d’arce choke in an instant, finishing the fight in just under three minutes into the second frame.