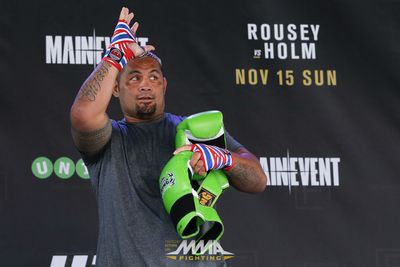 An interesting poopscapade out of the “Super Samoan’s” camp …

The United States Anti-Doping Agency (USADA) pulls no punches when it comes to tracking down Ultimate Fighting Championship (UFC) combatants.

Just ask this “Cowboy,” who failed a recent drug test due to his failure to disclose travel plans.

“I got tested for the first time three days ago and I’m like, ‘Wow, let’s be tested, yeah.’ They’re pretty brutal; they’re strict, the guys don’t let you go. Man, I was naked and the dude wouldn’t let me go. I got my dick in a beaker and he was just going… I said, ‘I need to go for a shit first.’ He was like, ‘Dude, go for a shit.’ And I’m like, ‘Oh, damn. You’re standing right there.’ So I was taking a shit, plus — ….View original article