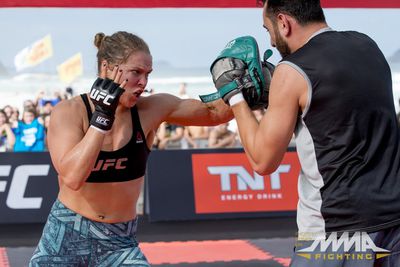 The event will be headlined by a much-anticipated women’s Bantamweight title fight, as division queen Ronda Rousey defends her belt for the sixth time against dangerous stand up specialist, Holly Holm.

In the co-main event of the evening, UFC Strawweight champion, Joanna Joanna Jedrzejczyk, will defend her belt against Valerie Letourneau. Also on the card, Antonio Silva will go head-to-head against Mark Hunt in a rematch of their epic Heavyweight showdown two years ago, which also took place in “The Land Down Under.”

Before ‘Rowdy,” “Preacher’s Daughter,” “JJ” and the rest of the participants take care of business inside the Octagon, the talented women and men were on hand earlier today at Federation Square to promote the PPV event by showing off their best moves during the open workouts.