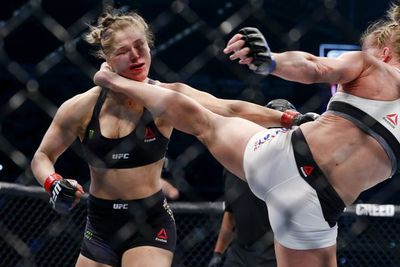 Let’s run down the list of “Who’s Hot” and “Who’s Not” from UFC 193: “Rousey vs. Holm,” which took place last night (Sat., Nov. 14, 2015), nominating the biggest winners and losers from the pay-per-view (PPV) event inside the Etihad Stadium in Melbourne, Australia.

In the main event, Holly Holm shocked the mixed martial arts (MMA) world by knocking out the seemingly indomitable Ronda Rousey via a vicious head kick to become the undisputed UFC Women’s Bantamweight champion of the world (highlights here).

With that quick overview of the night’s marquee bouts, here are your biggest winners, as well as the runners-up from down under.

In UFC history, there may not be a fighter who has been a bigger ….View original article