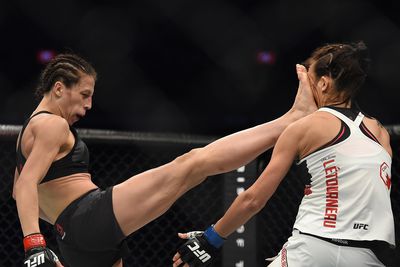 Last night (Sat., Nov. 14, 2015), Joanna Jedrzejczyk and Valerie Letourneau went to war at UFC 193 inside Etihad Stadium in Melbourne, Australia. In a competitive bout, Jedrzejczyk won a unanimous decision. Find out how below!

In both of her previous title fights, Jedrzejczyk was incredibly dominant. As the co-main event of a card headlined by Ronda Rousey, Jedrzejczyk was receiving more exposure than ever, and she hoped to capitalize on that with another brutal victory.

Similar to the other title challenger, Letourneau was a massive underdog being overlooked by just about everyone. Nevertheless, Letourneau had the opportunity to change all that by surprising the champion with her well-rounded game.

While Letourneau did impress, she ultimately came up short.

Jedrzejczyk opened with her usual volume, but Letourneau changed things around with a nice takedown. It took her a couple minutes to get back to her feet, but Jedrzejczyk eventually did, though Letourneau still controlled the fight ….View original article