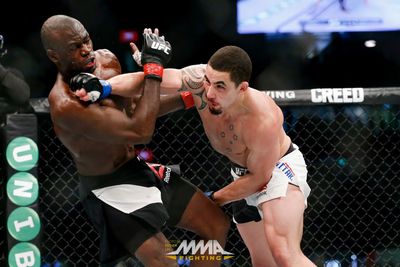 Last night (Sat., Nov. 14, 2015), Robert Whittaker and Uriah Hall clashed at UFC 193 inside Etihad Stadium in Melbourne, Australia. In a wild kickboxing scrap, Whittaker earned the unanimous decision. Find out how below!

Whittaker made the move to middleweight about a year ago, and the results have been fantastic. He entered this bout on the heels of two big knockout victories, and the Australian was looking for a third in front of his home crowd.

This was quite an opportunity for Hall as well. Coming off the biggest win of his career, Hall had a chance to legitimize his position as a contender and potentially add another highlight reel knockout to the list.

Whittaker opened the fight with aggression, trying to take his opponent’s head off with a hook before landing some nice kicks. After getting cracked with a hard right hand, Hall opened up as well, and both men began trading strikes.

At about the halfway point of the fight, Whittaker caught a spin kick and took Hall down. From top position, Whittaker was aggressive ….View original article