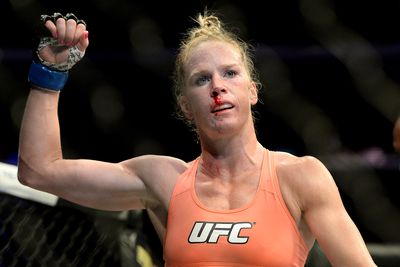 Last night (Sat., Nov. 14, 2015), Ronda Rousey and Holly Holm collided at UFC 193 inside Etihad Stadium in Melbourne, Australia. In a stunning performance, Holm knocked her opponent out. Find out how below!

After winning a number of grudge matches — and all the other ones — in violent fashion, Rousey looked to have a challenge without any bad blood in Holm, but that all changed after some weigh-in shenanigans. Regardless, Rousey was definitely looking to add another arm to her mantle.

Meanwhile, Holm’s quiet confidence leading up to the fight was something to behold, as she seemed quite undeterred by her vicious opponent. Last night, Holm had the chance to prove the world, and the odds makers, wrong.

In a surprising turn of events, Rousey did not open up with her usual blitz, although she was definitely pressuring her opponent. For just over a minute, Holm successfully avoided most of her opponent’s ….View original article