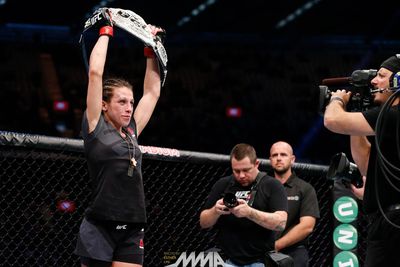 UFC Women’s Strawweight champion Joanna Jedrzejczyk put together another striking clinic this past Saturday night (November 15, 2015) in her title defense against Valerie Letourneau at UFC 193. Remaining undefeated and seemingly indomitable, MMAmania.com ponders what could be next for “Joanna Champion.”

The UFC 193 pay-per-view (PPV) did not exactly pan out the way UFC brass, pundits, or fans expected. Nearly everyone suspected both Ronda Rousey and Joanna Jedrzejczyk would retain their UFC titles at the Etihad Stadium in Melbourne, Australia last Saturday night (November 14, 2015), but it was only “Joanna Champion” who remained atop her division.

UFC 193 was meant to be a springboard for Jedrzejczyk, catapulting her into superstardom alongside the venerable Rousey, but mixed martial arts (MMA) rarely goes by the books.

Instead, Jedrzejczyk’s performance will be overshadowed by Holm’s epic knockout, but that doesn’t mean the Polish champion won’t soon become one of the leading faces of MMA and UFC.