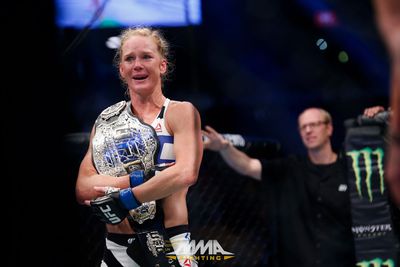 Ding dong, the witch is dead. Or, to quote Miesha Tate, a word that rhymes with witch.

Which old witch? The wicked witch who showed breathtaking levels of hubris and arrogance and disrespect to martial arts by treating her opponents with disdain. It is therefore no great surprise that mixed martial arts (MMA) fans rooted for a house to fall on top of Rousey and crush her.

Holly Holm played the role of the house in this case, utterly smashing Ronda Rousey in the main event of UFC 193 from inside the Etihad Stadium in Melbourne, Australia and sending the MMA world into jubilant celebration.

Holm’s unlikely hero status is the sort of sports story that fans dream about, the kind that becomes legend throughout the ages and repeated in allegorical conservation for all future championship fights. It’s the kind of story that reaches into our cultural psyche and connects with us on a deeply human level.

It is the reason that “Cinderella” is a popular term in sports folklore. We fully embrace the mythic symbolism of triumph in the face of great adversity and relish the idea of the over confident favorite getting their greatly deserved comeuppance.