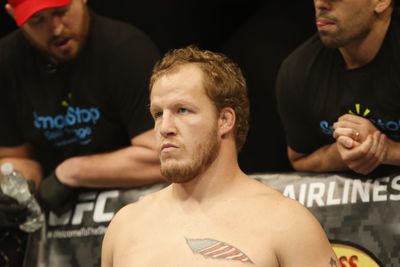 Check out a portion of our interview with three-time All-American wrestler, Jared Rosholt, who is poised to break into the Top 15 of UFC’s Heavyweight division if he can dispatch longtime mixed martial arts (MMA) veteran Stefan Struve in Melbourne, Australia, this weekend (Sat., Nov. 14, 2015).

In this day and age in mixed martial arts (MMA), you’ll have to forgive some people for being on their toes.

Injuries continue to ransack multiple Ultimate Fighting Championship (UFC) cards. And while it may be unfortunate, one man’s misfortune can sometimes be another’s gain.

Surging Heavyweight Jared Rosholt (13-2) sits on the outside looking in as far as rankings go in the 265-pound division. And even though a match up with dangerous Dutchman Stefan Struve (26-7) awaits him at the UFC 193 this Saturday night (Nov. 14, 2015), “The Big Show” at least pondered calling his employer about stepping in to face the opponent-less Ben Rothwell at UFC Fight Night 76 last month.

“It sucks because he was trying to get anybody to step up and take that fight and it was one of those times where I don’t know if he would’ve wanted ….View original article