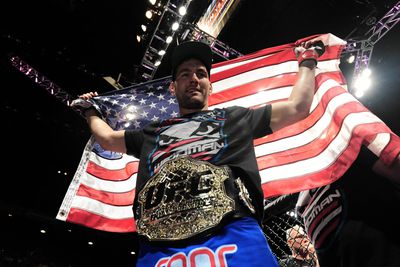 It’s good to be king.

Chris Weidman is now the newest member of the Reebok family, as the Ultimate Fighting Championship (UFC) middleweight champion announced the news during his stop at The MMA Hour studio in New York earlier today (Mon., Oct. 19, 2015).

With Senior Business Unit Director for Reebok Combat Training Michael Lunardelli by his side, “All American” revealed he would be joining Ronda Rousey and Conor McGregor (details here and here), who have been lucky enough to nab solo sponsorship deals with the sports apparel brand.

To his surprise, Weidman was presented with his very own customized shoe, which was decked out in the American flag decor. And if you’re wondering why it took so long for the 185-pound champion to get a deal with UFC’s biggest sponsor, Lunardelli explained why.

“We literally wrote down our top roster of who we wanted. The first day we came into this thing, he was at the top of the list. We had Ronda, Conor, and Anthony and he was on the list, but he had another deal and we had to wait for that deal to end. We’ve been patiently waiting. He would have been one of our first ….View original article