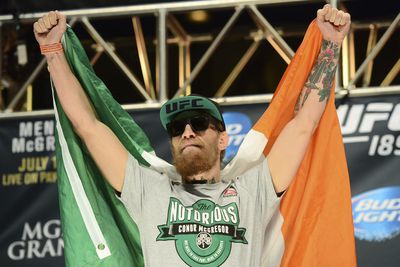 Conor McGregor’s loud and brash style may not be one that resonates with everyone, but the Ultimate Fighting Championship (UFC) interim featherweight champion can be candid when time calls for it.

That was evident during his one-on-one interview with BT Sports’s Gareth A Davies. During their chat, “Notorious” talks about the historic UFC 189 pay-per-view (PPV) event in which he defeated Chad Mendes to claim the interim title and what his life has been likes since capturing the gold.

Of course, McGregor discussed his upcoming title fight against current 145-pound champion, Jose Aldo — which is set to go down on Dec. 12, 2015 in Las Vegas, Nevada — and boldly predicted that if “Junior” shows up, he will be knocked out unconscious within one round.

“He wont be there, I just don’t think he will be there. He didn’t show up last time. We’ll see. History, eye contact, his gym, training approach; I just think with all those things combined he can’t make it to the contest. But, if he shows up, I feel I will KO him inside one. If he makes that walk, I feel every single movement I make will get an overreaction out of ….View original article