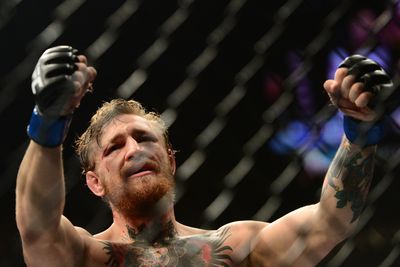 We don’t know “Notorious” to be a crier, but he once was when he suffered his first mixed martial arts (MMA) defeat back in June 2008.

“John [Kavanagh] thought that McGregor could defeat me. According to his words, I was a fighter who already had experience in overseas performances, was in the rankings and they didn’t have to pay me much. I paid for a ticket from my pocket and flew to Ireland to fight. [McGregor] cried after the fight. Kavanagh came to him and consoled him.”

During that time frame, he met Russian wrestler Artemij Sitenkov — a little known prospect allegedly hand-picked by SBG Ireland’s head-honcho John Kavanagh — at the Cage of Truth 3 event in June 2008 in Dublin, Ireland. What ensued was a quick submission loss — one of two on his professional record today — for “Notorious,” which subsequently resulted in the water works flowing.

Happy tears flowed from the face of Dublin’s own, following his most recent victory over two-time title challenger Chad Mendes back in July. Will he have the same success against “Junior” inside MGM Grand Garden Arena later this evening?

You’ll just have to watch to find out.

For complete coverage of the entire UFC 194: “Aldo vs. McGregor” fight card, including post-fight recaps and analysis, click here.