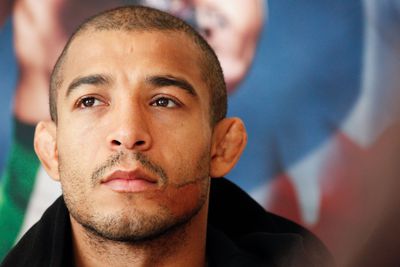 After months of delays, back-and-forth jibber-jabber, interim titles, and just about every other monkey wrench available in the combat sports toolbox, Jose Aldo and Conor McGregor will finally throw down to find out who is the undisputed featherweight champion.

And that’s just the tip of the proverbial iceberg.

In the “Aldo vs. McGregor” pay-per-view co-main event, part of tonight’s (Sat., Dec. 12, 2015) mixed martial arts (MMA) extravaganza inside MGM Grand in Las Vegas, Nevada, Chris Weidman and Luke Rockhold will hook ’em up for the “All American” belt.

Strap in and enjoy folks, this card is about as good as it gets.

But before we break down the five-fight PPV line up, be sure to get up to speed on the UFC 194 “Prelims” — airing on FOX Sports 1 and UFC Fight Pass — with our full preview and predictions here. “Aldo vs. McGregor” odds and betting lines are here.

Nostradumbass predicts: Conor McGregor is an exceptional fighter. I don’t think it’s up for debate and that goes beyond wins and losses. He has great awareness inside the cage, is difficult to keep grounded, and displayed some next-level striking from day one.

But he’s also had a fairly easy ride to the top.

The Irishman’s bravado and running commentary on his own greatness makes most of his wins feel bigger than they actually are. I won’t completely discount his win over Chad Mendes, but at the same time, we have to recognize it came against a fighter who was asked to headline the biggest PPV of the year with just two weeks to prepare.

To gloss over that fact is to suggest that nothing matters except for what ….View full article