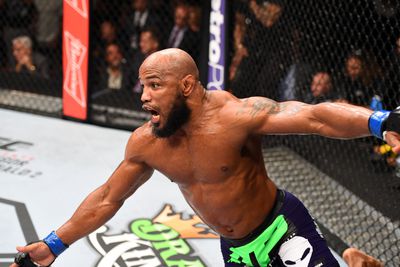 LAS VEGAS — The adage “don’t leave it in the hands of the judges” came back to bite The Alligator.

Ronadlo “Jacare” Souza opened up with a big barrage on a fading Yoel Romero in the third round of their middleweight contenders bout Saturday night at UFC 194.

But instead of going for what looked like an impending finish, Souza instead took it to the safety of that mat. And when he didn’t get the finish, the scorecards went against him.

Romero nearly finished the bout in the first round, as he connected on a devastating spinning back fist which connected to the jaw. Romero pounced on the grounded Souza and did everything except finish the fight. Souza nearly fell on his way back to his corner between rounds.

In the second, Romero so flagrantly grabbed the fence on a Souza (22-4, 1 no-contest) takedown attempt that referee Marc Goddard ordered a restart when Romero ended up in top position. This was the closest round of the fight and likely decided the difference on the cards.

The third was all Souza’s, but he wasn’t able to get the finish, and came up short on the cards. The former Strikeforce champ had an eight-fight win streak snapped.