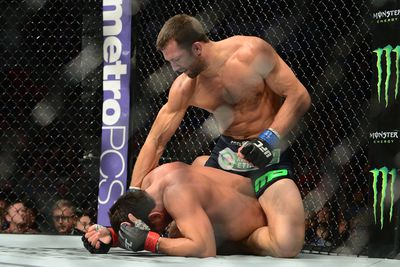 Luke Rockhold is still fighting to get the respect he feels he deserves.

It’s something he’s been trying to do since his days in Strikeforce, where he fought great competition such as Ronaldo Souza to win the 185-pound title and defended it against tough foes such as Tim Kennedy.

But, since those bouts didn’t take place inside the Ultimate Fighting Championship (UFC) Octagon, Rockhold says he didn’t get the credit he deserved. And after winning four of five bouts under the UFC banner, Rockhold declared during the UFC 194 pre-fight press conference (video replay) earlier this afternoon that his aforementioned fights were tougher, including his most recent victory over Lyoto Machida.

Even though many have called his win over “The Dragon” the best of his career to date.

“It feels good to be credited for your work and what you do and pride yourself on, of course. So for your accomplishments to be beaten down and made less of what they really were, of course I came in with a point to prove when I came here. I’m here now and I am here to make another point. People still look at my last win as my biggest one, they don’t realize ….View original article