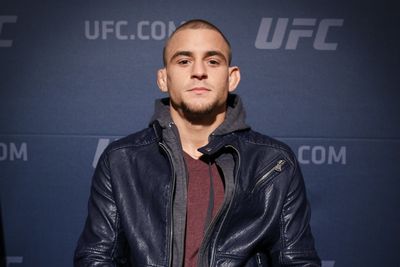 After being slated to compete at UFC Fight Night 76 against Joseph Duffy on a Fight Pass-exclusive card last October, resurgent lightweight Dustin Poirier chose to ride the pine after a concussion scratched “Irish Joe” from competing in his native Ireland.

“The Diamond,” a winner of two straight inside the Octagon in 2015, was then rescheduled to clash with Duffy at the UFC 195 pay-per-view (PPV) event, which takes place tomorrow night (Sat., Jan. 2, 2016) in Las Vegas, Nevada.

With most traditional fight camps lasting anywhere between 6-8 weeks, it’s safe to say Poirier has been preparing for this explosive tilt for over three months. However, the longer wait wasn’t that big of an adjustment, according to the “more mature” American Top Team (ATT) representative.

Poirier’s admission to MMA Fighting over the delay in Dublin:

“I’m kind of more laid back now, man. I’m just more relaxed with who I am and I’m having fun again. It hasn’t really been a lot of pressure, honestly. I really feel like I’m going to be smart in this fight and show all of my skills. I’m a different animal here at lightweight. There’s not a spot in this fight where I won’t be comfortable.”

The 26-year-old veteran is still very young, but has competed in 22 professional bouts since 2009.

Poirier has tallied 18 victories across the featherweight and lightweight divisions, producing several highlight-worthy stoppages, including his last two over Yancy Medeiros and Carlos Ferreira.

But the No. 12-ranked lightweight isn’t just a one-trick pony.

Poirier is proficient on the ground, as evidenced by his back-and-forth war with previous 145-pound title challenger, Chan Sung Jung, in May 2012.

After making his debut in the 155-pound rankings, following his last win over the Brazilian grappler Ferreira, Poirier would like nothing ….View full article