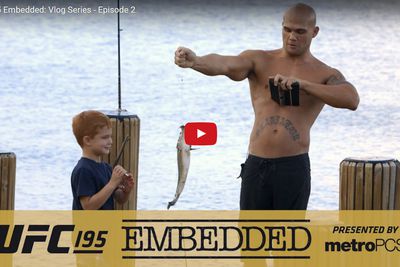 On Episode 2 of UFC 195 Embedded, unlikely training partners square off in the Jackson-Wink gym as welterweight title challenger Carlos Condit’s son spars with merciless Jon Jones, and heavyweight Andrei Arlovski shares the mat with flyweight John Dodson. Heavyweight Stipe Miocic plays a prank on his coworker at the local firehouse before getting serious when duty calls, while welterweight champion Robbie Lawler channels his competitive drive into a day of fishing with his family. UFC Embedded is an all-access, behind-the-scenes video blog leading up to the welterweight fight at UFC 195: Lawler vs. Condit, Saturday, January 2 on Pay-Per-View.