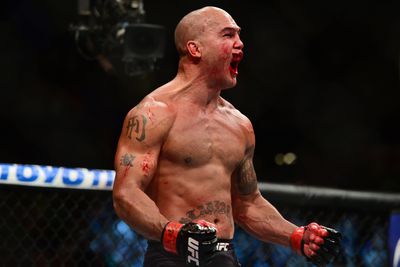 Robbie Lawler and Carlos Condit collide TONIGHT (Jan. 2, 2016) at UFC 195 inside MGM Grand Garden Arena in Las Vegas, Nevada. In a match up of powerful boxer and Muay Thai specialist, what adjustments must be made for either man to claim victory? Find out below!

Lawler earned his position as champion of the world with blood and grit. The fierce boxer hasn’t been able to blow any of his opponents out of the water in title fights, but he’s nonetheless managed to become the titleholder and defend his crown.

Meanwhile, Condit returned from the roughest portion of his career with a brutal victory via doctor stoppage. While it’s hard to argue that he really earned his title shot in this case, Condit has been one of the best for a long time and will look to make the most of this opportunity.

Let’s take a look at the keys to victory for each fighter:

This fight will almost certainly play out on the fight. Neither Lawler nor Condit look for offensive takedowns with any regularity, as both men prefer to strike.

Against the lanky Muay Thai fighter, Lawler needs to capitalize with his boxing. His punches and combinations are far more fluid than Condit’s, meaning he should ….View full article