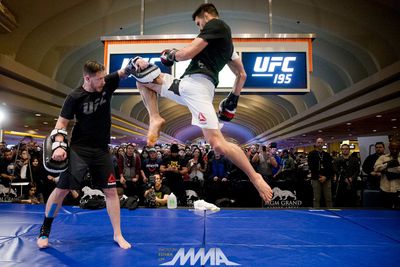 The event will be headlined by a much-anticipated Welterweight title fight, as division king Robbie Lawler defends his belt against Carlos Condit in what is sure to be an exciting scrap

In the co-main event of the evening, Andrei Arlovski and Stipe Miocic will meet in the center of the cage in a Heavyweight showdown that could provide the next title contender.

Before “Ruthless,” “Natural Born Killer,” “Pitbull” and the rest of the participants take care of business inside the Octagon, the talented men were on hand yesterday in “Sin City” to promote the pay-per-view (PPV) by showing off their best moves during the open workouts.

Noticeably absent from the proceedings was Stipe Miocic, who announced prior that he’d be “MIA” after his flight to Vegas was canceled.

Let’s just hope the heavy hitter can catch a flight before fight night.