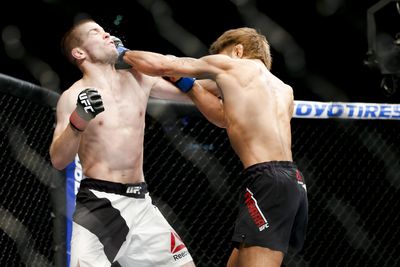 The UFC 195 prelims on Saturday night drew 1,032,000 viewers, a number that is ten percent above the pay-per-view prelims average since the shows became fixtures on FOX Sports 1.

The number was remarkably similar to the first Saturday of 2015, the UFC 182 prelims, which did 1,039,000 viewers. But the main event on that show was Jon Jones vs. Daniel Cormier, one of the biggest UFC fights in recent years. While prelim ratings aren’t a great predictor of pay-per-view numbers, there is usually a correlation. But if UFC 195 does one-third the 800,000 plus pay-per-view buys of Jones vs. Cormier, it would have to be considered a success.

Based on 2015 numbers, the overall viewer figure would be behind most of the blockbuster UFC shows, such as those headlined by Anderson Silva, Ronda Rousey, Jones and Conor McGregor. It would be ahead of all of the other shows from last year, and even beat the UFC 189 prelim ratings, which was the McGregor vs. Chad Mendes show. It did so without a major name fighting on the prelims. The prelims main event was Michael McDonald vs. Masanori Kanehara, a fight with less interest than the Fight Pass main event of Dustin Poirier vs. Joe Duffy. Noke was the biggest name fighting on the prelims.