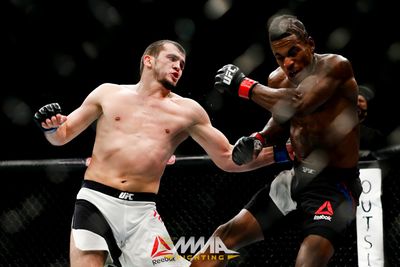 LAS VEGAS — The intriguing UFC 195 welterweight showdown between Lorenz Larkin and Albert Tumenov seemed to come down to whether Larkin would be able to use his leg kicks to effectively set up the rest of his offense, or whether Tumenov’s boxing would carry the day.

Turns out Larkin landed plenty of leg kicks at the MGM Grand Garden Arena, as Tumenov’s bright red lead leg attested. But he wasn’t able to add much more to his offensive mix. That left Tumenov the opening to outslug Larkin in a solid tactical battle on Saturday night.

Tumenov won on a split decision, getting two of three 29-28 scores for his fifth straight victory.

“Larkin is an excellent fighter,” said Tumenov (17-2) through an interpreter. “I called him out for this fight, I don’t just call out anyone, but I want to fight the best.”

Tumenov got the best of the first round, landing heavy hands and a big head kick against Larkin, who seemed content to land leg kicks and then scamper out of the way.

In the second, though, Larkin’s leg kicks began to take their toll, as Tumenov visibly winced at the impact of several. Still, Tumenov fearlessly pushed forward and even threw head kicks with his rapidly swelling leg.

Larkin (16-5, 1 NC) showed more urgency in the final round, pushing the pace and mixing things up better than he did over the first two rounds, including a spinning back kick to the legs. But it wasn’t enough to get the nod.

“I call myself ‘Einstein’ for a reason,” Tumenov said. “I knew what he was going to do. But he’s so tough.”

Larkin had a two-fight win streak snapped and lost for the first ….View full article